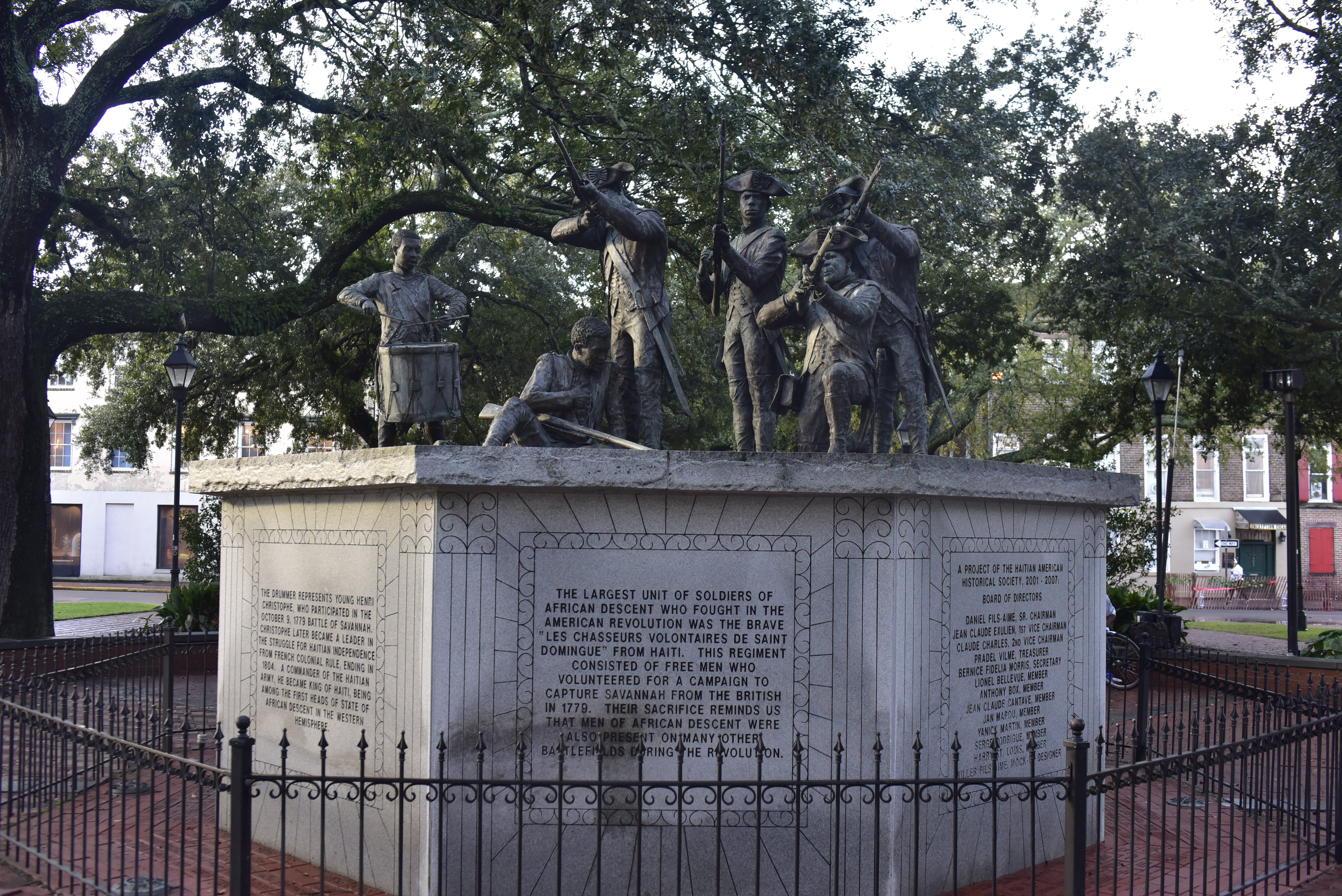 The monument to the Haitian soldiers that volunteered their services to the city of Savannah sits in Franklin Square. Photograph by Donnell Suggs.

Savannah, Ga. – On Veteran’s Day morning, the monument to the 500 Haitian soldiers that helped protect this city during the Battle of Savannah (also known as the “Seige of Savannah), one of the earliest battles of the Revolutionary War on October 9, 1779, was still wet from the previous night’s rain. The four soldiers and the drummer boy (there are five soldiers on the monument, one sits on the ground with his left hand on his chest nursing an apparent wound) stand valiantly in the morning sunshine. The monument to “Les Chasseurs Volontaires De Saint Domingue”, translated from French to English to mean “Volunteer soldiers of Saint Domingue,” stands in Franklin Square on the West end of City Market, a great place to congregate on a morning like this. Four men discussed the recent presidential election in the shadow of the oaks in the square.

The history of Savannah and the many people that make the city a diverse gem in the crown that is the state of Georgia also has a strong Catholic bent. There cannot be a story told of the Catholic history of Savannah without mention of the Black Catholic history of contributors like the volunteer free Black soldiers that came here to help fight a war they may not have had a direct stake in but fought in for the future of Haitians that might have, and ultimately did come here to the States to live. “This is a very important piece of history,” said Elizabeth Jeanty, Executive Director at the Haitian American Historical Society, based in Miami, Florida, by phone. “Those soldiers did not have to come to this country to help win the Revolutionary War. They were free Black men that helped make the United States of America possible.”

According to Pew Research,  most Haitians in America are Roman Catholic. The former Saint Domingue, now Haiti, has Catholicism written into their constitution. Its Latin-American origins have a lot to do with Catholicism being the spiritual base in the United States with both Haitian-Americans and native Haitians.

The regiment, 10 companies that totaled 500 soldiers, joined the Colonial Revolutionary forces in a failed attempt o retake Savannah from the British. The contributions from the Haitian soldiers, Catholic Black men, free men in a country that considered their people, of African descent, not worthy of freedom, are important historical moments in Savannah. “Their participation helped reduce the number of American soldiers that were killed,” Jeanty suggested.

The idea of dedicating a monument to the regiment began with the Haitian Historical Society. Then  championed and pushed forward by Savannah Mayor Floyd Adams, Jr.  That was the start of a long overdue relationship between Savannah and their Haitian residents. “They were going to find a way to make sure that this sacrifice by the regiment became public,” said Jeanty. “The plan was to have the monument near the back of a cemetery, but Mayor Adams suggested the idea of placing it in a downtown square. He really researched their history.”

The monument, sculpted by James Mastin, was dedicated in October 2009. There are eight panels on the base of the memorial, one of which reads in part, “The largest unit of soldiers of African descent who fought in the American Revolution. This regiment consisted of free men who volunteered for a campaign to capture Savannah from the British in 1779.”

Every October the Haitian American Historical Society has an annual celebration of the volunteer soldiers in Savannah but had to postpone this year’s event, usually held at the monument and at a nearby hotel, because of coronavirus and social-distancing requirements.

This year was the 20th anniversary of the Haitian American Historical Society and an anniversary party was on the agenda. “Next year we hope to celebrate the 21st anniversary with a networking event,” said Jeanty. “Haitians have been treated unfairly at times in the United States but we did contribute to her freedom.”