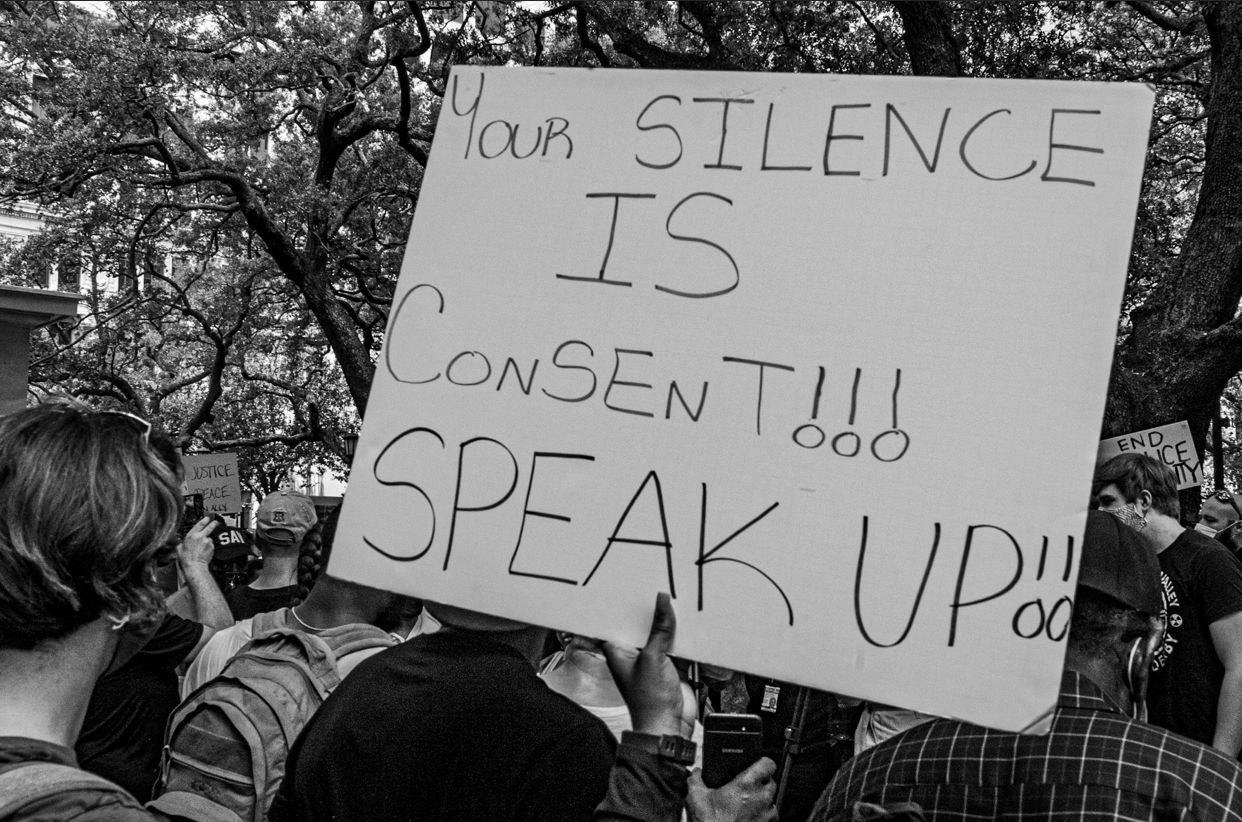 Signs like these were displayed throughout the crowd assembled on Johnson Square Sunday, May 31. Photograph by Michael J. Johnson

SAVANNAH, Ga.- A crowd of nearly 3,000 gathered peacefully, but forcefully to protest what seems to be the irregular and inconsistent maltreatment of black and brown people in America. Protests around the nation were organized following two events in close succession that led, once again, to the deaths of black men and tore open a long lingering wound that grows deeper with every unjust and unnecessary death. Many protests around the country, in particular in Minneapolis, Minnesota where most recently George Floyd, 46, was choked to death by a Minneapolis Police Department officer Derek Chauvin, turned violent, riotous, and deadly.

In Savannah however the protesters - at the urging of clergy, community leaders, and Mayor Van Johnson - remained peaceful during the march from Johnson square to city hall Sunday. Peace prevailed during the 90 minute rally with placards and signs emphasizing peace and the need for unity accompanied the boisterous cries and chants of the protesters.

The highlight of the crowds frustration coming after a suggestion by Johnson to join the police department to better understand the dynamics of law enforcement, “If you don’t like what police are doing become one,” said the former policeman and Savannah City Council Alderman for the First District. “All police officers aren’t bad, we just have to get rid of the bad ones.”

One of those officers the mayor was referring to, Savannah Police Department Chief of Police Roy W. Minter, Jr. addressed the crowd adding, “We who wear this uniform need to see you, hear you and most of all respect you.”

Civic leaders and members of the local clergy, there were a reported 60-plus in attendance, also spoke to the crowd in support of their spirit and determination and urged them to show the world that Savannah "could do this right." Church of the Epiphany pastor Father Michael Chaney said of the need for unity, “I’m here to share with you that now more than ever it’s important for all of us to feel the power of the spirit and get woke. People of privilege, we must be better allies at this time.”

Near the protest’s end Johnson, who asked for and received eight seconds of silence from the majority of those assembled, told the crowd “This rally is a moment, it is a response to injustice.”

That moment seems to be one that has yet to pass with a smaller, but equally as representative of the community and productive, turnout in Forsyth Park for an "Enough is Enough" rally last Saturday, June 6. That gathering, which featured several speakers, including Mayor Johnson and Chief Minter, was also peaceful.

Asked if the rallies need to continue in order to better illustrate what their purpose and the ultimate goal is, Father Robert Chaney, pastor at Resurrection of our Lord Church, Savannah, who did not attend either rally, mentioned in this story, said, "You can't let it go away, this can't be a one-time event," said Chaney by phone. "This has to continue being a movement. I feel very positive about these rallies, and when you're positive, you get positive results."