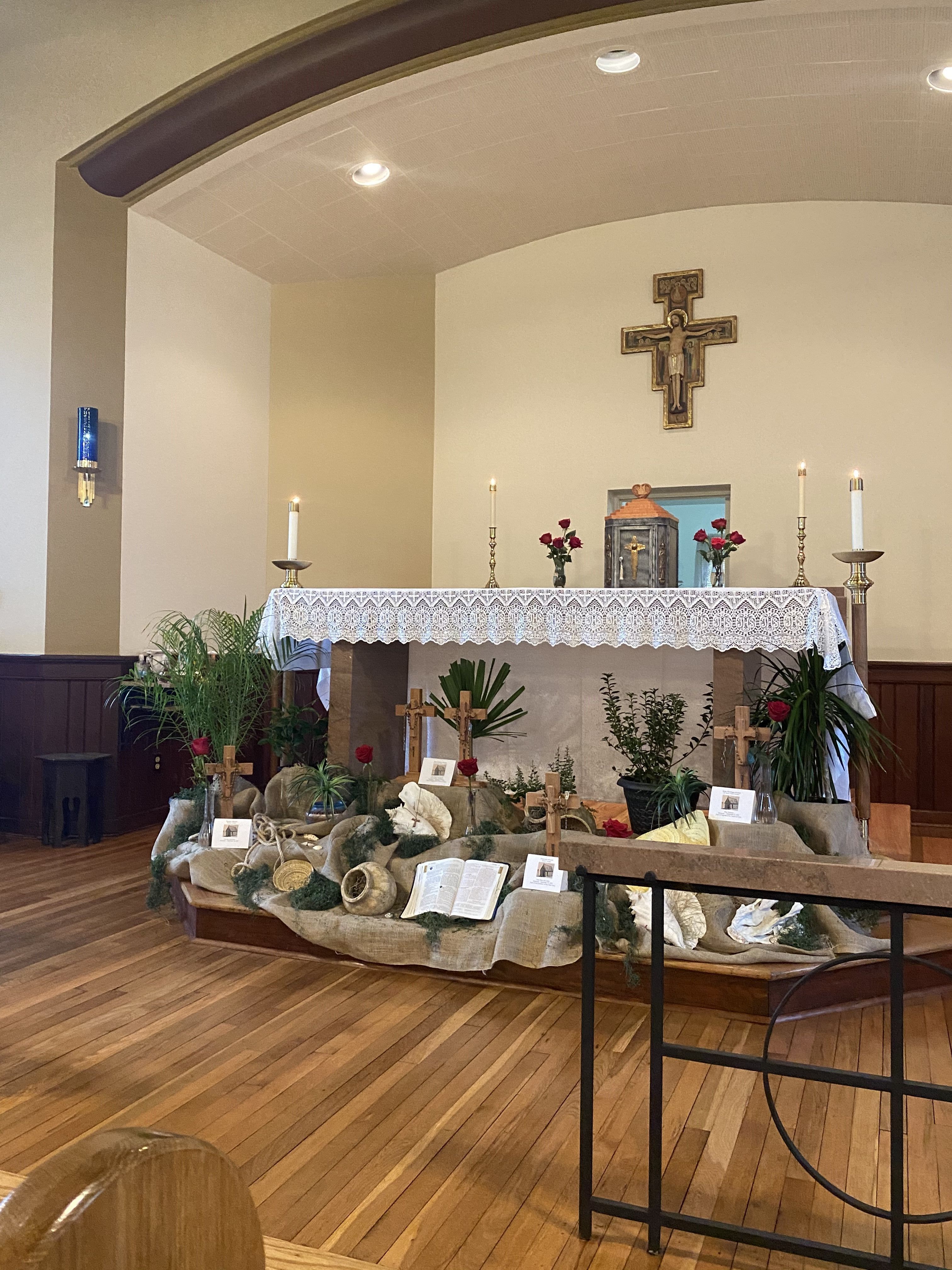 The altar at Nativity of Our Lady Church, Darien has been decorated by parishioners Patricia J. Kota and Donald Smith in honor of the Georgia Martyrs. Photograph by Donnell Suggs.

DARIEN, GA. - The church bells rang at exactly 1 p.m. as Doll Gale walked into Nativity of Our Lord Church, Darien and immediately started greeting parishioners. She was baptized at this parish in the 50’s, married at this parish in the 70’s and had her and her husband’s children baptized soon thereafter. The Nativity of Our Lady Church is home for Gale. “I was born and raised in this parish,” she said between greetings. “I guess I’m the oldest living original parishioner still here.” Gale is correct, she was born in 1955, the church was built 75 years ago in 1945. The diamond anniversary of the parish coincides with many memories for Gale, who’s late mother played the organ during Masses and father’s family, the LaNasa’s, name is on one of the stained glass windows in the sanctuary. “I remember my parents telling me how they all would meet for Mass before the church was even built,” said Gale.

Nativity of Our Lady has a number of dedicated parishioners with similar stories. People like the Daniels, John and Laurie, who not only contribute to Mass, but to the fundraising efforts for the parish. The Brunswick residents began attending Nativity of Our Lady a decade ago after having attended St. Francis Xavier Church, Brunswick for 22 years. “The Sunday we visited, from that moment on we never left,” admitted Laurie, the baby blue veil resting on her shoulders matching her eyes. “We were welcomed as family, there’s just something special about this place.”

There was something about this small parish in Darien and it’s distinctive connection to the Georgia Martyrs that kept them coming back and many others like them. Patricia J. Kota, another Brunswick resident that attends Nativity of Our Lady, and the resident Georgia Martyrs historian agrees. “I really feel this parish is the heart and soul of the [Georgia] Martyrs,” she said, tears beginning to fall down her face. “This is where Fray Pedro de Corpa was.”

She continued, “This is ancient history that has been ignored and almost lost, it’s important that we continue to recognize their impact and sacrifice.”

The parish sanctuary was near capacity as Bishop-elect Parkes began his homily following readings by seminarian Lewis King and John Daniels of the day’s Gospel Sirach 27:30-28:7 and Romans 14:7-9. The readings reflected on mercy and forgiveness and Bishop-elect Parkes piggybacked on those subjects while also reflecting back on the Georgia Martyrs’ ultimate sacrifice and legacy. “Today our readings addressed forgiveness, but that doesn’t mean we keep a scorecard for people who wrong us,” he said. “We don’t count the numbers, we let that be in God’s hands.”

Bishop-elect Parkes told a story of two friends hiking in the Grand Canyon and how they got into a disagreement that led to an argument. One friend wrote that his feelings were hurt in the sand. Moments later he later wrote that he was happy the two were friends in a rock after he was helped from falling off a cliff. The moral being that writing how angry you are in sand is temporary. Writing how much you love, respect and cherish your family and friends should be permanent. “The wind and the rain will wash away the hurt,” Parkes said. “The inscribings in the rock will never get washed away. We must put good deeds on rocks.”

About the Georgia Martyrs he said, “Today in this place we remember the Georgia Martyrs, we remember the beautiful gift of their lives of discipleship. About how they came here from a different country, spoke a different language and evangelized the people. What they left and what they came to were two totally different worlds, they did it out of faith, they did because they were called to spread mercy, compassion and God’s love.”

Bishop-elect Parkes is scheduled to be ordained the 17th Bishop of Savannah September 23. He mentioned how fast time was flying during his homily while asking those in attendance for their prayers. “I just ask that you whisper my name to God,” said Parkes. “I can tell the gift of faith is here in your hearts and I am grateful to you for your prayers.”

“They gave their lives for our faith.”

The altar was decorated with burlap, palms, baskets, crucifixes and small wooden crosses. The decor, designed by Kota, was applauded by Bishop-elect Parkes towards the close of the Mass for its unique design and originality. “I don’t know Father Tim, who does your liturgical arts, but if they would like to decorate a few other things I can have a list for you,” Parkes jokes. “It is such a wonderful place to meditate and to reflect upon the thanksgiving and the witness the martyrs gave.” The wooden crosses, one for each of the Georgia Martyrs, were hand-crafted by Donald Smith, another in a long line of Nativity of Our Lady parishioners looking to keep the martyrs' memories alive through creative works of art. ”I have been making these crosses for Lord knows how long,” said Smith, who has a workshop complete with three table saws and three drill presses “just for these crosses.” Smith has been attending Mass at Nativity of Our Lady for nearly 30 years. “Not one of these crosses have been sold but they have made it all around the world,” he said. Smith gives the crosses to parishioners and visitors in pairs and asks only that they give one away to someone else in order to keep the spirit of give alive.

“When I am making [the crosses] I am making them in the spirit of Christ,” said Smith who admits to almost never missing Mass since he first discovered Nativity of Our Lord nearly three decades ago. “When I got here I knew I was home,” he said. “This place changed my life and if I miss a Sunday it’s like I’m hungry because my spirit hasn’t been fed.”

Another example of evangelization and sacrifice from the people of the only parish in the Diocese of Savannah physically graced by the Georgia Martyrs. “We remember and witness the beautiful example of faith these men gave,” said Parkes. “We probably should not be called to be martyrs, but we are nonetheless called to mirror, and to be instruments of what the [Georgia] Martyrs teach us, and what they teach us is God’s love, mercy, compassion and forgiveness.”