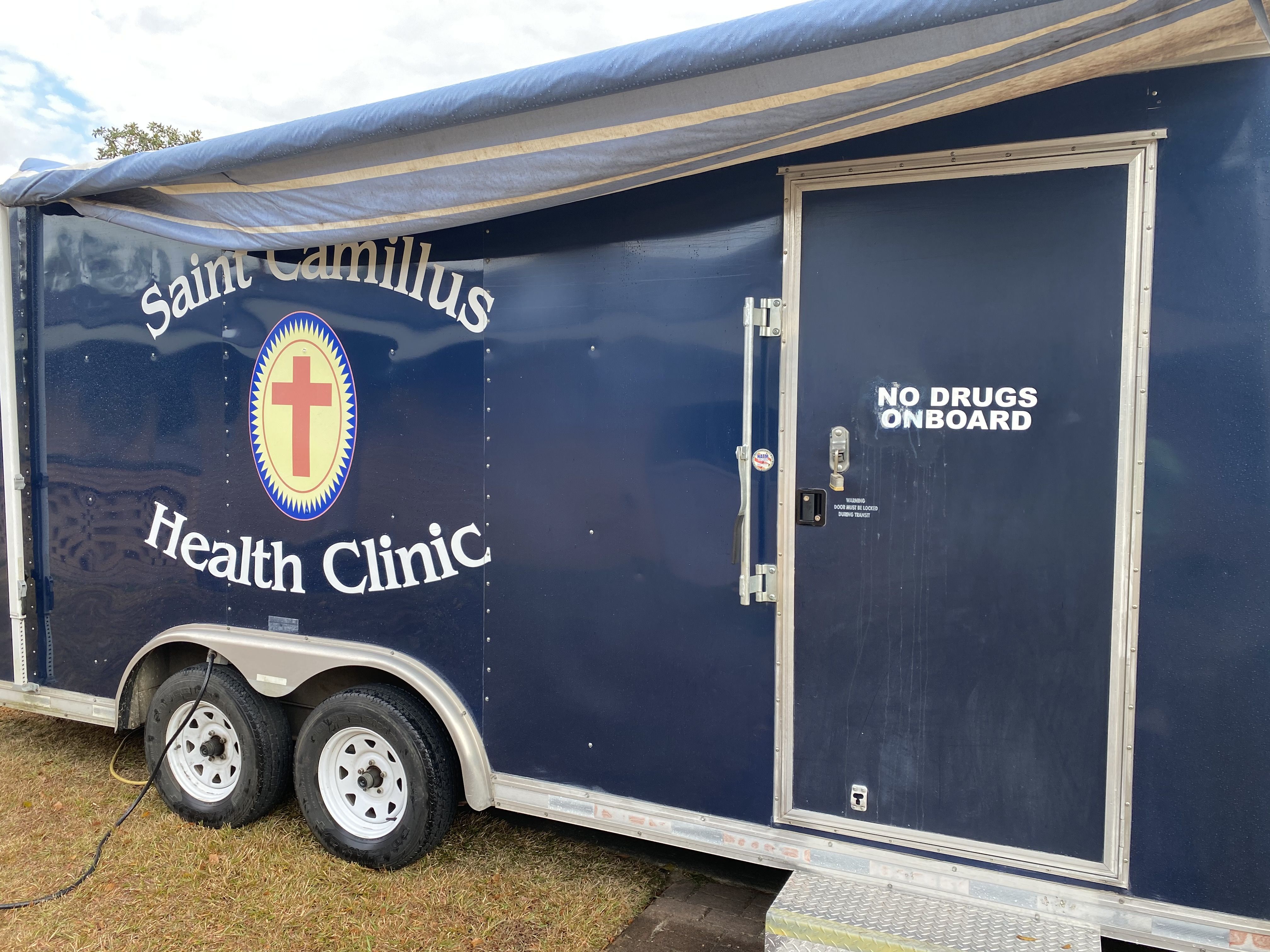 The trailer for the St. Camillus Health Clinic has a small examination room in it for patients to receive care. Photograph by Donnell Suggs.

Sylvania, Ga.- Amy White, a middle-aged Black woman wearing a colorful facemask and blue jeans, checked in with Margueritte Driggers at the front desk. White was early for her appointment. She was the third woman to arrive at the Saint Camillus Health Clinic on Monday, December 14, the last appointment day of the year. The clinic only takes appointments; no walk-ins are allowed to remain socially-distant during the current pandemic better. White knew she would be seen, but she wanted to make sure she was early. The clinic is the only option she has if she’s looking to remain healthy. “It’s a blessing for me to be able to get medical services like this without an income,” White said after sitting in the makeshift lobby of the Our Lady of the Assumption Church, Sylvania hall turned part-time clinic. White is currently unemployed, and she has been attending the clinic for a couple of years. White, who said this is her only option “Until I can get on my feet,” is grateful for the opportunity to see her doctor, even if it’s only once a month. “If it wasn’t for them, I don’t know where I’d be,” she said.

The St. Camillus Health Clinic examination room is in a mobile medical unit, a trailer, to be more precise, that rests outside of the hall doors. The trailer’s back wall lets down to become a ramp for the occasional patient who uses a wheelchair. Climate-controlled and, for the most part, fully outfitted, the trailer health clinic has helped assist Screven County residents of all faiths since the summer of 2008. The clinic is operated by Father Louis Lussier, M.I., the pastor at Our Lady of the Assumption Church, Sylvania. Ongoing services are provided by operations manager Charles Kimbrough, the sole full-time employee and a native of Sylvania, and a host of volunteers like Driggers, Virginia Moats, a local nurse, and Sophie Kent, who runs a similar free community clinic in neighboring Millen.

All medical checkups and minor procedures are free of charge. The medical professionals involved in the monthly services are protected by the state’s Good Samaritan Law, which deems citizens helping fellow citizens exempt from legal liability. Without volunteers, the clinic would not be possible, said Kimbrough. “Getting more folks to volunteer is more important than money,” he said. The doctors and nurses at the St. Camillus Health Clinic, physicians like Dr. Mary Sparkes, who was the attendee this day, are volunteering to help because they want to, not because they feel they have to. Getting out of her red Toyota Prius a half-hour past noon, Sparkes looked forward to seeing patients. She retired from a long career as a neurosurgeon and emergency room doctor at St. Joseph’s/Candler in Savannah and decided she still wants to practice medicine, just on a smaller basis. “I’m ready to go again, so I told Charles [Kimbrough] I’d give him a clinic once a month,” said Sparkes.

Having worked in a hospital the size of St. Joseph’s/Candler, Sparkes understands the security that comes with patients having health insurance and how a rural county like Screven, population 2,445 (2018), just doesn’t have as many insured patients. The unemployment rate in Sylvania rose from 4.4% in February to 8.2% in August, according to homefacts.com. Sparkes believes the St. Camillus Health Clinic is a necessary vocation. “This clinic is really important,” she said. “There are two different economies going on in this country, and one is poor and cannot afford health insurance.”

Father Lussier, a native of Montreal, Canada, agrees with Sparkes. He came to Our Lady of the Assumption Church 15 years ago and immediately saw a need for a health clinic. Along with 12 volunteers, a plan was made to create a free clinic for area residents and whoever was in need. “When I came down here, the idea was to attempt a different approach to health care so that we as an order could look at this country because it’s so complicated to work within the [health care] system,” said Lussier, who is a member of the St. Camillus Order. “Our vows include a vow to care for the sick, so I wasn’t coming here to just do some parish work, I was coming to do some Camillin ministry, and the people here just responded very generously to that goal.”

Six of the eight appointments on the books were seen by 2:30 p.m. that afternoon. All of the patients were given follow up appointments for the next time the clinic is open, January 12, 2012. Some received prescriptions for medicine, others like White were told to keep up the good work with their blood pressure and glucose levels. All were served. “We have been at it for almost 12 years now, and it’s not easy because we kind of have to work isolated because we don’t have access to other things,” said Lussier. “I am thankful to St. Joseph’s/Candler because they assist us with blood work, and so on.” Lussier mentioned that X-rays and EKGs are not covered by the hospital or any other outside entity. The St. Camillus Health Clinic helps pay for patients to have specific procedures done. There have been occasions where medical specialists have provided services, but rarely, if ever, is it free. “If I send somebody to get an exam by a specialist, he’s going to have a lot of ideas about what’s going on, and that’s where the financial numbers go up, and that’s where the system is really not friendly to the poor,” said Lussier. “Sometimes if you have good contacts that can help, but you run the risk that these patients can get a bill.”

And that’s where St. Camillus Health Clinic comes in. The clinic is not financially supported by the Diocese or any private donor. Kimbrough explains that this is so the clinic can give support to its patients without any red tape. “Our clinic is basically for patients who have no means of getting medical care,” he said. “We are here for them.”

Ending his volunteer shift, retired United States Army nurse Eddie McCorkle, a Sylvania native and a childhood friend of Kimbrough, turned in his ID badge and stethoscope. A volunteer since 2016, McCorkle, a non-Catholic, wanted to give back to his hometown. “You see needs in your community, so when I first learned about St. Camillus,  I said, ‘I’m in,’” said McCorkle who spent 20 years in the military. “Sylvania has always been a depressed area, so If you can give a little back to the community, then that’s OK.”