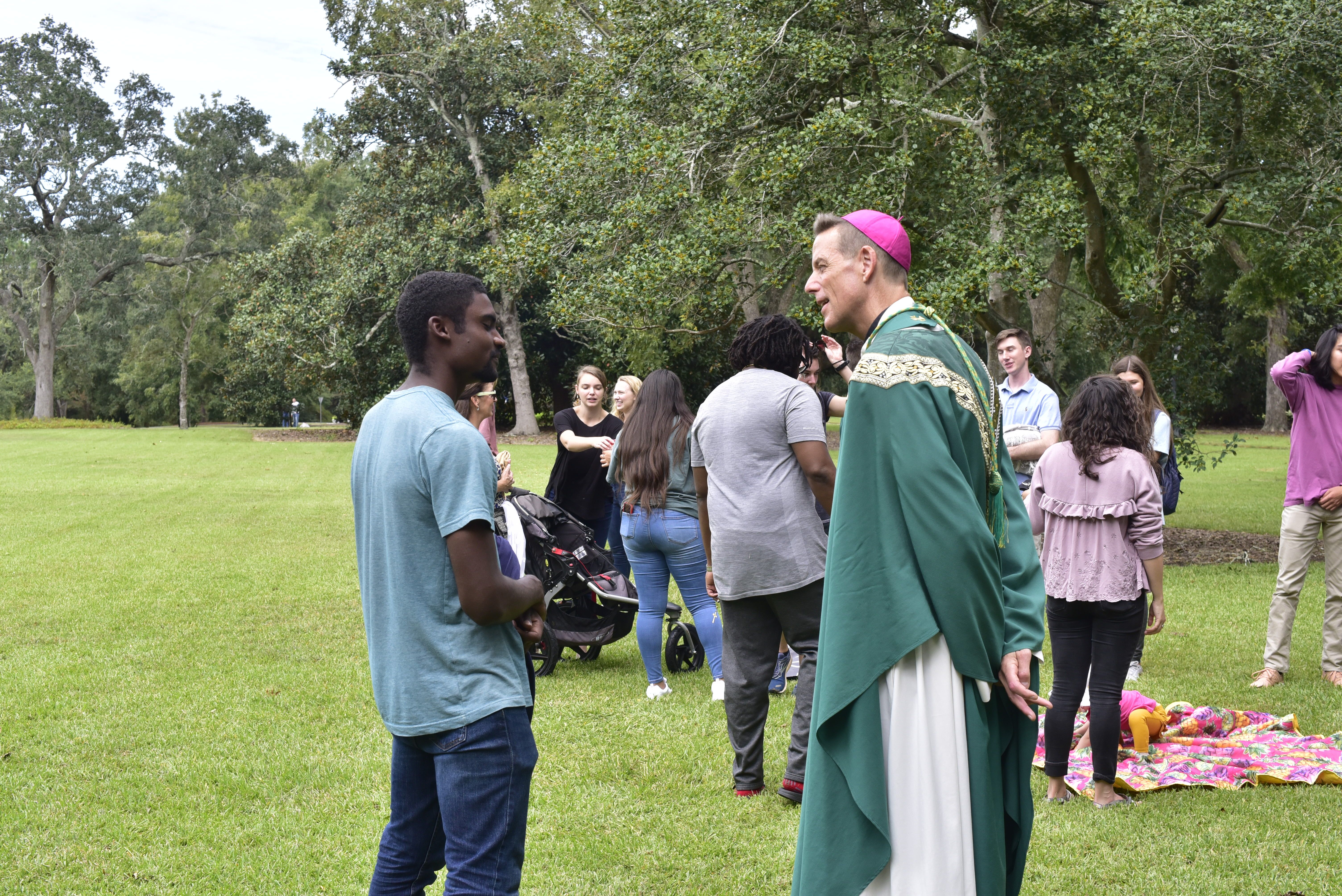 STATESBORO, GA. - Ashley Aut and Lily Juarez carefully unfolded the table cloth. They placed it on the grey table that came out of Ashley’s white Kia Rio trunk. Then they patiently set up a makeshift altar under a shady tree on a spacious green space across the street from the Anderson Hall University Communications and Marketing building. The weekly “Mass on the Grass” celebration always takes place on the grounds of Georgia Southern University. Aut, the Catholic Eagles Director of Development, and Juarez, the organization’s Fellowship Chair, were there a half-hour before the noon Mass to make sure everything was set up for Bishop Stephen D. Parkes’ first visit to the university. Aut then carefully hung the altar server’s robe from a tree branch in anticipation of a volunteer needing it before Mass.

The Catholic Eagles, a student ministry officially branded on the Statesboro campus in 2016, has always been a haven for incoming students and upperclassmen looking to find or strengthen their place in Catholicism. Juarez, a senior and Civil Engineering major, is one of many students who migrated to the organization after transferring to Georgia Southern a few semesters ago. “It’s a beautiful experience,” said the Albany (Ga.) native about being a part of what makes the Catholic Eagles tick. “Being around people that are so into their faith helps me grow as a young adult and as a Catholic. When I came here [to the Catholic Eagles I felt so welcome.”

Music Education major and active United States National Guard soldier in the 116th Army Band, Serenity Salser, had a similar experience when joining the Eagles. Salser, 20, dropped her Army regulation fatigue backpack on the grass and immediately greeted fellow Eagles and guests. After all, as Outreach Coordinator, it’s part of her job. “To me, it feels like a lot of responsibility, but when we have events and people come, that’s the joy of this position,” she said. Salser commutes from Dobbins Air Reserve Base in Marietta to the Statesboro campus once a week. About being a Catholic Eagle she says, “It’s a wonderful feeling.”

There are weekly and biweekly events like  “Thirsty Thursdays,” where Catholic Eagles get together at someone’s home or at the movies to unwind.  Or “Theology on Tap,” which has a guest visit campus to speak on current events and their connection to Christ. There is “Mass on the Grass on Tuesdays,” where depending on the weather, an outdoor Mass takes place. The organization is wholly student-led, making for a comfortable atmosphere for students, be they freshmen or transfers, on-campus or commuter students.  “I hadn’t really been exposed to things like Bible study, night prayer, and weekly hangouts,” said Vice President Jeickob Tinoco. “I didn’t need to attend, but I did because it was a time for me to be with my people. It has helped me grow in the faith,” said Tinoco, 20.

“Thirsty Thursdays” is now held outdoors to better accommodate for social-distancing. “Mass in the Grass,” which is already outdoors, is “spread out much more now,” said Tinoco. “We’re all pretty distant now, it has changed quite a bit.”

Tinoco, 20, remembers how it felt to have the option of practicing his faith on campus in a way more comfortable for a teenager. Like most of us, he was told when to go to church by his parents as a child. As a freshman away from home for the first time, he had to get to Mass if he wanted to go. “I wanted to explore Catholicism and attend Mass on my own,” said the Bethlehem (Ga.) native. “I actually got to learn about what it meant to be a Catholic.”

“I get to see people give their time to the Lord, and that is a wonderful feeling,” added Salser.

According to its website, the Catholic Eagles is a program dedicated to “the sacraments, faith formation and fellowship.” The program is in association with St. Matthews Church, Statesboro. St. Matthews celebrates Mass every day of the week, holding a Spanish Mass on Saturday nights and a college Mass, complete with a dinner, on Sunday nights. Adoration and confession also take place during the week. Private confessions can also be scheduled for those who prefer more privacy. St. Matthews pastor Father John Johnson also doubles as the Catholic Eagles chaplain.

Fr. Johnson believes the unity the organization gives students is a crucial component to its existence and necessity, especially in times like these. “You can’t go it alone, you can’t do it by yourself,” said Johnson in his office an hour before Mass began. “There is a whole atmosphere of ideas in college life, but at the end of the day, we want to enter into that space. Our concept here [with the Catholic Eagles] is that we’re here to support and inform people about their faith.

“We want to provide a space for people to live their faith and also to do what Jesus taught us to do, and that’s to  live as a community.”

The students like Aut, Juarez, Salser, and Tinoco learned more about their faith through the Catholic Eagles than what one might experience at their local parish. That is the beauty of the Catholic Eagles and the support the mission gets at Georgia Southern University and at St. Matthews Church. A part of Tinoco’s role as Vice President of the Catholic Eagles is to promote the benefits of becoming a Catholic Eagle. Still, he’s also someone who has significantly benefited from his experience. “It makes you want to come back every year,” he said of the attraction to joining the Catholic Eagles. “We are choosing to do it, and it’s fun.”

The fun has been adjusted a bit due to the pandemic. Still, the Catholic Eagles schedule, which posts every week to their Facebook page and can be found on their website, is plenty full. “We still have to follow the procedures that the church and CDC give us,” noted Tinoco.

During his homily, Bishop Parkes mentioned St. John the Evangelist, who is often symbolized by an eagle. He said, “There is something very beautiful and spiritual about the eagle. God calls us to take the higher road. Our faith calls us to go above and beyond and to be closer to God.”

The Bishop told a story about being invited to a parishioner’s home and being told to relax. He was isolated in a room alone, but he didn’t want to relax. He wanted to help prepare dinner or set the table just like Aut and Jauraez did before Mass. He wanted to be a part of a community at that moment. “I went to that home to feast on the people and their company.”

The Catholic Eagles are here to help students feast as a community. “You are not a church of tomorrow; you are a church of today,” said Parkes. “God needs you now.”