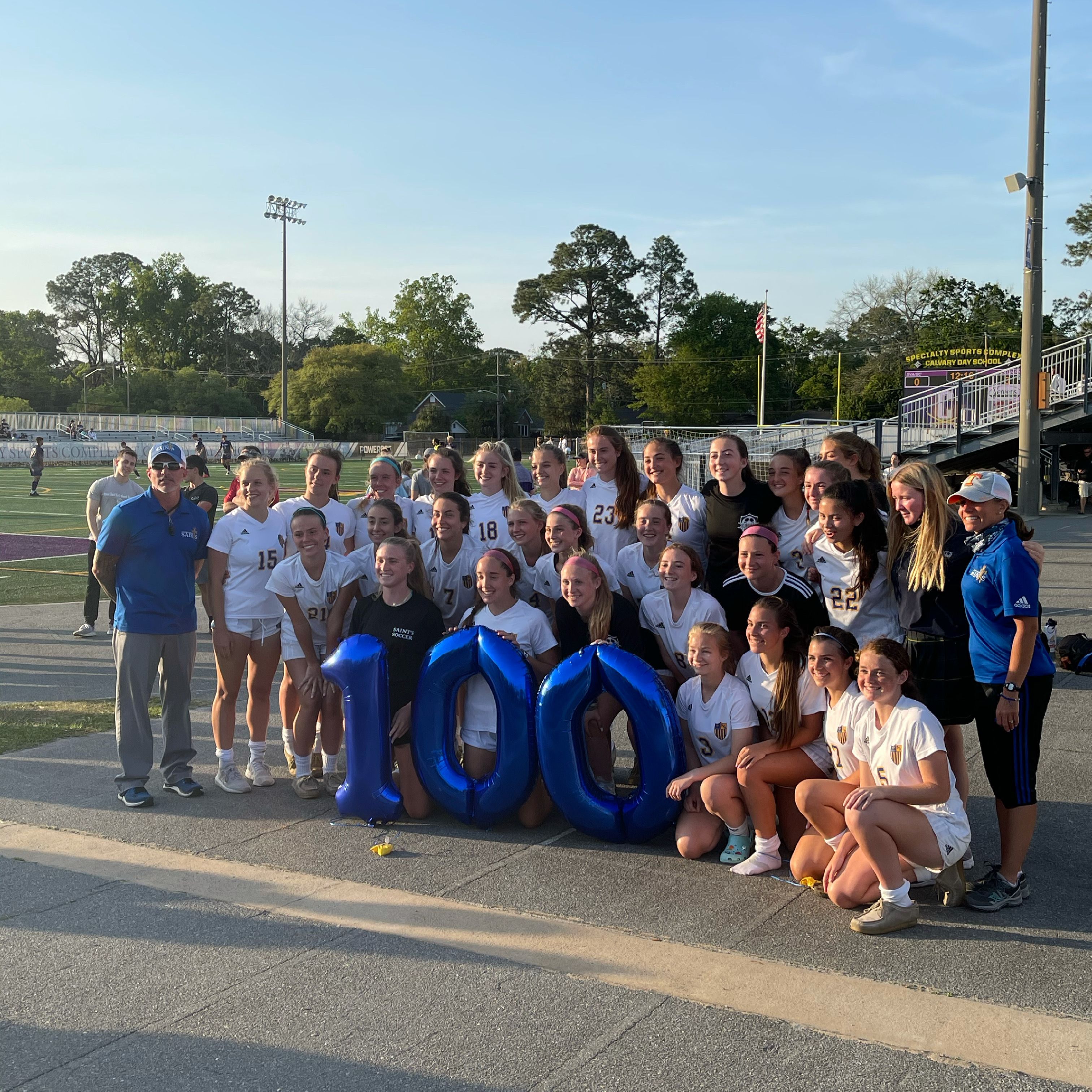 The SVA Saints pose for a postgame picture with some special balloons commemorating their 100th victory over the past 7 seasons. Photograph by Donnell Suggs.

Savannah, Ga. - The St. Vincent’s Academy Saints soccer program won their 100th match during the past seven seasons Tuesday night at Calvary Day School. Along with that impressive milestone comes another important fact of the ongoing season, the Saints remained undefeated at 8-0-1, continuing their dream season. "The girls this program brings in and what they are able to do as a team, for so many years is what makes this so special," said SVA Assistant Athletic Director Nichols St. Louis in an email.

Asked what have been the keys to her team’s high level of play this season, Saints first-year head coach Katie Knight said, “It’s the team chemistry. The girls are fierce, they like to win, they want to win and they’re driven to win.”

And win they did Tuesday night, taking a 5-0 lead into halftime led by a pair of goals by senior striker Emma Beddow, a Columbus State University commit. Sophomore goalkeeper Kyrin Fox solidified the Saints victory with excellent play within the goal. The Saints have been able to hold three teams (Savannah Christian, Savannah Arts Academy and Savannah Country Day) scoreless this season. Only one team, the Glynn Academy Lady Terriers during a 3-3 draw on March 11, scored more than a goal against the Saints this season.

It has also been a dream debut for Knight who has coached soccer for years but only boys. This is not only her first season at St. Vincent’s but as a girls soccer coach. Not bad for a coaching debut. “These girls have been extremely coachable this season,” said Knight, who played soccer for a season in college.

The Saints completed a season sweep of the Cavaliers, having already defeated them 4-1 on Benedictine Military Academy’s field, where they played some of their home matches, March 23. St. Vincent’s has matches against Savannah Christian Wednesday at Memorial Stadium (5 pm) and at Aquinas High School in Augusta Friday (5:30 pm). The Georgia High School Association state playoffs begin just days later on April 20.