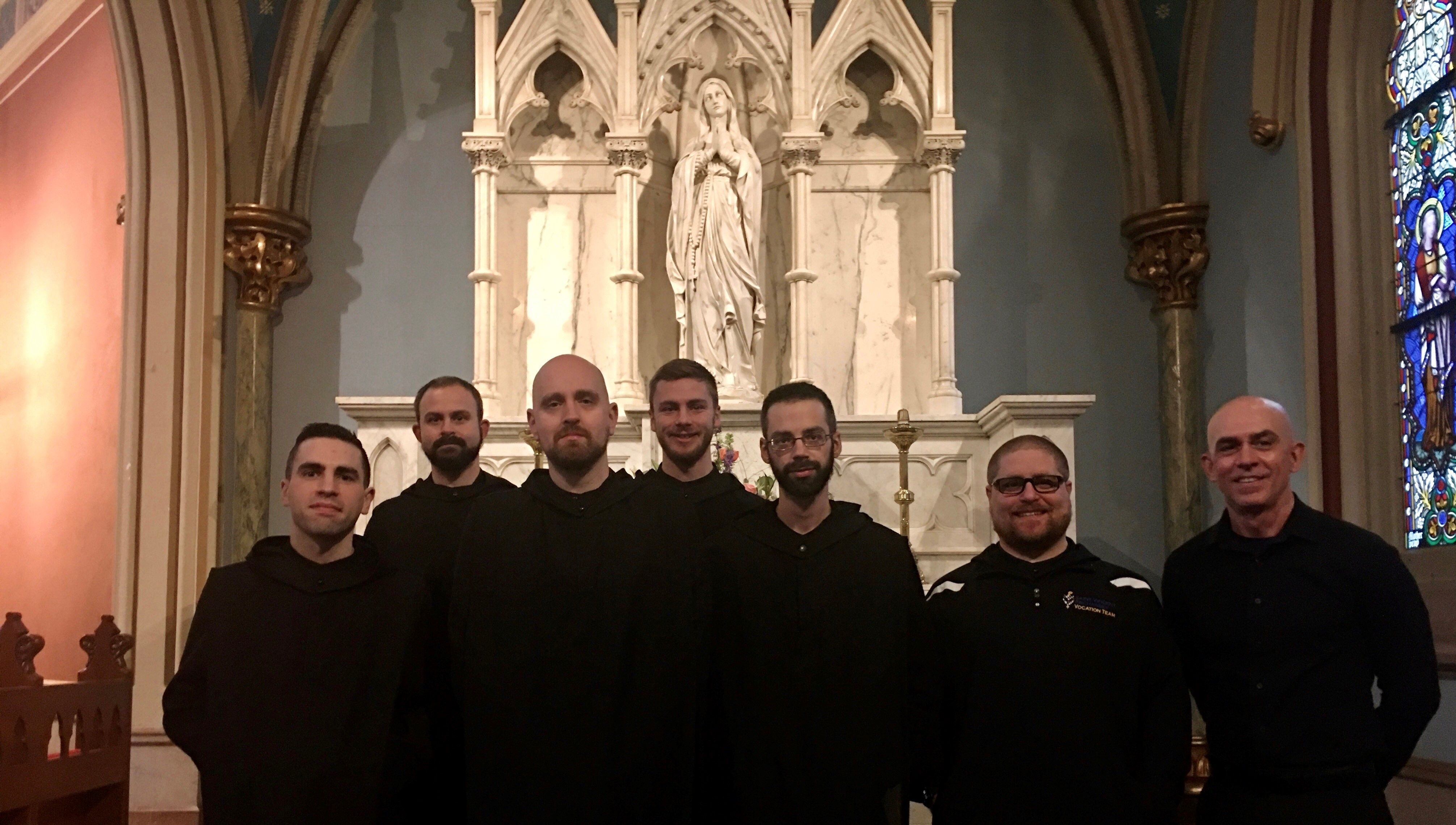 Benedictine monks from St. Vincent's Archabbey made a visit to Savannah's Cathedral Basilica of St. John the Baptist lastweek. They were in town as a part of an annual trip to the city and Benedictine Military Academy. Photo credit: Father Max Maximillion, O.S.B.

Savannah, Ga. - The drive south to Savannah from Latrobe, Pennsylvania, is just under 700 miles depending on who’s driving. “I think you can safely get here in 12 hours,” said Brother Xavier O’Mara. “That means you got here in nine,” joked Brother Francisco Whittaker who drove down in a separate car along with Brother Angelo Lichtenstein. O’Mara made the trip with Brothers Gregory Visca and Sean Cooksey. The familial and collegial energy among the Benedictine monks assembled in the den of the priory on the campus of Benedictine Military School (BC) Friday, January 15 feels a lot like a family. Or maybe more like teammates in the locker room following a huge victory or students in a dormitory at the end of a long day of classes. The brotherhood that is being a Benedictine Monk has brought these monks and a postulate, Tim Sheridan, a teacher in Ohio that is “kicking the tires” on becoming a monk himself, to Savannah for the annual two-week visit.

Father Max Maximilian, O.B.S., the former Vocation Director at St. Vincent Archabbey in Latrobe, is now assigned to be an instructor at BC, created the two-week program to allow monks in the early stages of formation “to see what it is like to be a Benedictine monk here in Savannah,” said Maximilian. “The program also allows the monks to get to know the students at BC and familiarize themselves with potentially teaching at the school.” For Visca and O’Mara in particular this experience has a particular motive as they both are interested in teaching. The upstanding educational reputation of BC students and faculty is a combination many, if given the opportunity, fail to not take advantage of.

“I just fell in love with teaching and before entering the monastery I was working on my teaching certification for high school,” said Visca, a Tampa, Florida native.

“My specialty is college admission, higher education, counseling, that sort of thing and I love interacting with the student-body and getting to know the families on an individual basis,” said O’Mara, who worked for nearly a decade in college admissions in Pennsylvania. “That’s one of the connections that I love here [at BC], I could just see myself digging my feet in the dirt and then all of a sudden 15, 20 years passes by and I’m like ‘where did the years go?’. That’s totally something that I want.”

Beginning Jan. 12, a day after the monks arrived, an itinerary of meetings with BC headmaster Father Frank Ziemkiewicz, O.S.B., tours of the school facility and local attractions, dinners and midday and evening prayers were scheduled to take place. They also took time Friday afternoon to visit the world famous Leopold’s ice cream shop. All that attended were impressed. A trip to Tybee Island and an evening bonfire were both put on hold due to the weather.

The monks spoke about their commitments to the Benedictine Order and why they decided to embrace this way of life. The initial process is a four year commitment and for the men in that room there were so many reasons to take on the challenge.

“I remember reading The Rule of St. Benedict many years ago and I was discerning a religious vocation for many years throughout high school and I just kept putting it off,” said Cooksey who lived in Pittsburgh, an hour drive from Latrobe. After continuing to do research he decided to fill out an online application and father Max called him a few days later. Cooksey made a couple of visits and never looked back. “It just fit,” he said. “God just took down all of the obstacles that would have been in my way and just made them disappear. That’s just the way it was.”

Whittaker grew up in the Erie area and had thoughts of joining the priesthood, even beginning the application process and taking interviews at the Diocese of Erie (Pa.). He decided to attend college at Saint Vincent and see where God would lead him. “As soon as I stepped foot on campus I felt this is where I wanted to go to school,” said Whittaker, 23. “I decided to start attending morning prayer and evening prayer and there was one morning I was there. I just felt really happy to be there and that was the Lord telling me that was because this is my home. As soon as I graduated I entered.”

The theme of home is one that was repeated by the monks. The Benedictine Order is home for these men. “You will always have a home, you’ll always have a room, you’re always going to have a place at the table,” said O’Mara about the brotherhood.

Liechtenstein, who served this country in the United States Army before entering the Order, did not grow up Catholic and did not have any plans to join any religious order. The base chaplain talked to him about looking into the Benedictine Order and Lichenstein found similarities between his life as a soldier and the Order. “Monastic life had some similarities with my life from The Citadel to the Army,” he pointed out. “Being in a community of men, following a schedule, living according to the rules, regulations, living in a structure of authority but with a deeper understanding of a more grounded end goal.”

The misconception of monastic life being a life of solemn prayer and chanting is one the monks had fun dispelling. After all they were here on a mission in Savannah, part vocation, part location. “A monk of Saint Vincent’s can be a scientist, a teacher, many vocations,” said Maximilian. “There’s a broader identity of potential out there and that’s what drew me to the monastery.” Current Saint Vincent Archabbey Vocation Director Father Canice McMullen, O.S.B. earned a Bachelor’s of Science from Pennsylvania State University. In other words the vocation possibilities are endless. For more information on the monastic way of life please contact Father Canice at www.stvincentmonks.com .

It also means you don’t have to make the 12 hour drive, depending on who’s driving, alone.