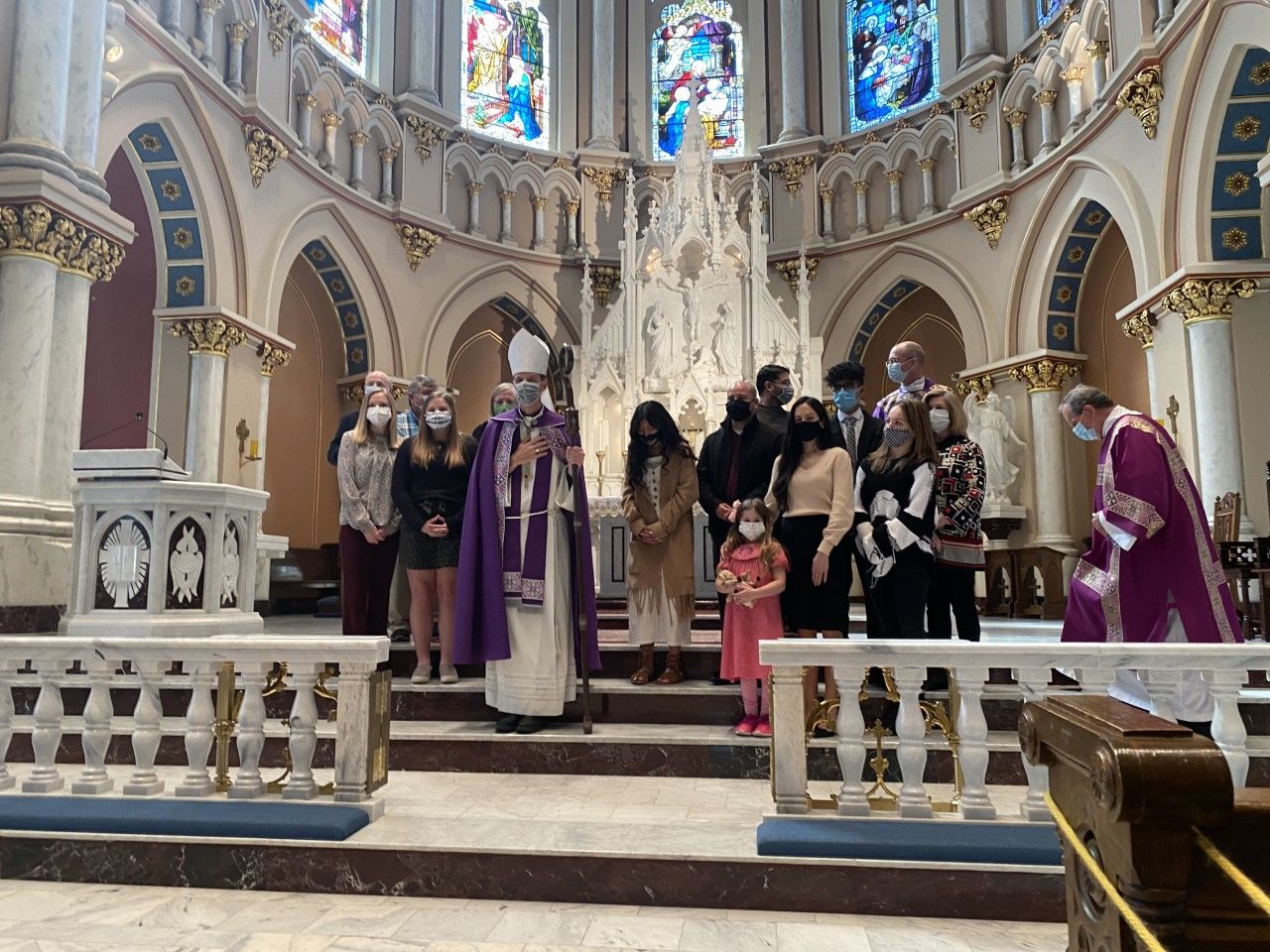 Bishop Stephen D. Parkes (center) poses for a picture with catechumens and their godparents following the Rite of Election at St. Joseph Church, Macon Saturday, Feb. 20, 2021. Photograph by Donnell Suggs.

MACON, GA.- Jason Ruiz, a parishioner at St. Anne Church, Columbus put his hands on the shoulders of his son Lewis, 14, and daughter Luann, 16, and bowed his head. The active duty United States Army soldier was inside St. Joseph Church, Macon as his kid’s godparent, along with their mom and the couple’s three younger children, who were also there in support. The Ruiz family came to support Luann and Lewis as they began their journeys as Catholics by celebrating the Rite to Election. Jason, their sponsor, was standing witness to his children. As Bishop Stephen D. Parkes asked the catechumens if they “wish to fully enter into the life of the church?,” everyone standing answered “We do,” including Jason, a longtime Catholic who was clearly caught up in the moment. “I think it’s what brings our family together and goes along with our tradition,” he said following Mass. “This is a big part of their lives and I hope it guides them on their journey.”

Father Emanuel Vasconcelos, OFM Conv. was also in attendance to support the Ruiz family. Vasconcoles is the Right of Christian Initiation of Adults (RCIA) at St. Anne Church and helped instruct Lewis and Luann during the process. In his third year as an RCIA coordinator, Vasconcelos knows times are different but the mission and purpose of Rite of Election remains the same. “I think it’s important for us in the faith, those of us that have been practicing and may have been born Catholic, to encourage [them] and to see those called to the sacraments,” he said. “Even during a pandemic God is still using people to bring to the faith.”

The Rite to Election Mass for catechumens within the Columbus and Macon deaneries, which took place at St. Joseph Church Saturday, Feb. 20, was described by Father Scott Winchel, the pastor at St. Joseph, as “an opportunity for the church to welcome these individuals into her fold. It is a way on behalf of the church to invite them and embrace them on their journey toward the Lord and ultimately to eternal life.”

Following readings from the Books of Genesis (2: 7-9, 3: 1-7) and Romans (5:12, 17-19), during his homily Bishop Parkes spoke of mysteries and choices, the message mixed within the text of those scriptures that were read moments earlier. “With God there is mystery so there’s always a little of that unknown,” said Parkes. “In life there’s beautiful mysteries, something that we need to celebrate. We really can’t know everything so let's leave something for God. There’s mystery to how God invited you to this place, in the year of St. Joseph.”

Following the Bishop’s homily the seven catechumens, Lawrence Lambert, the Ruizs, Rivers Shackleford, Elizabeth and Lauren Tanner and Brooklyn Youngclaus, each made their way to the altar along with their godparents in order to sign the Book of Elect. Youngclaus, her black and white mask matching her sweater, smiled as she signed the book. Her smiling face reflected that of a child on Christmas day.

Parkes held the book aloft after the seven new Catholics had signed their names to it. “The reason for us being here today is that God has elected you, God has chosen you to be a part of our family,” said Parkes afterward. “Today is a very important chapter in your life with God.”

Asked how he felt after the Mass, Lambert, who was making his first visit to St. Joseph Church, said of the experience, “It was beautiful and so spiritually assuring. It was a true blessing in my life.”