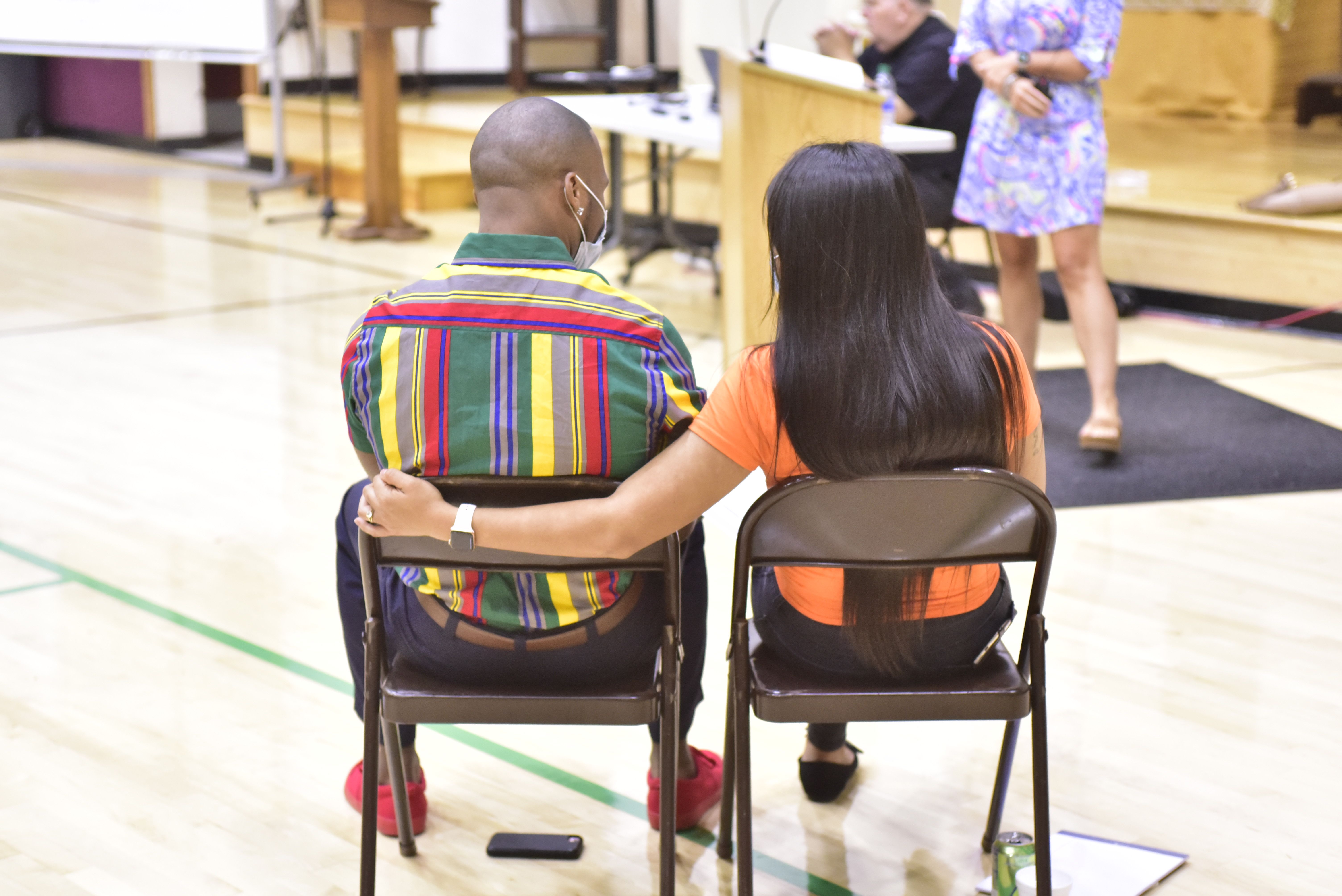 A couple sits through a financial literacy presentation during the first night of a PreCana retreat at St. James Church, Savannah Friday night. Photograph by Donnell Suggs

SAVANNAH, Ga. - The chairs, set up in pairs for the occasion, were spread out in the gym at St. James Church, Savannah with six-feet of distance between them. Day one of the two-day PreCana retreat took place Friday, July 31 and for the 14 couples in attendance it would be an opportunity to hear from experienced speakers, presenters and married couples.

PreCana retreats are offered throughout the diocese in both English and Spanish. The marriage preparation retreat at St. James was the first in a couple of months due to COVID-19 restrictions and adjustments to the PreCana schedule. The reason for the large amount of couples in attendance was due to the many reschedules that had to occur. “This is a big class,” said Deacon Lou Santore, the retreat moderator, who has been married to his wife Mary for 49 years. “Normally, on average, we have about six couples signed up, but we’ve postponed two classes to this point.”

Usually held in a classroom setting, the gym was the best place to hold the retreat. A projector and screen feet from a basket while the couples took up the majority of the basketball court. The scoreboard at the north end of the gym read 0-0 the entire night but plenty of points were scored by the assembled married couples who took turns introducing themselves to the pairs of fiances in attendance following an opening prayer by Deacon Santore. All three of the couples to tell their stories of marriage, how they met and why they feel so strongly about the institution had been together longer than some of the 14 couples attending the retreat have been alive. Each had plenty of wisdom to share.

“I knew Mary was the right one for me because she’s Mary,” said Santore. “She makes me a better person.”

Deacon Bob Fritts said of his wife Mary Beth, the pair have been married for 37 years, “She’s a great mother, my best friend and keeps me in line.”

Brian Kennedy has been married to his wife Sally for 36 years after the pair met in Charleston, South Carolina. He was a cadet at The Citadel, she was an underclassman at the College of Charleston. They met at Mass and according to Sally, “Have been together ever since.”

Father Peter Lanshima, St. James Church spoke with the couples about the theology of marriage. The soon-to-be-married couples, some of whom met while attending local medical schools, others via online dating sights, and others still through friends, were treated to a whiteboard with the word marriage broken down into an acronym: M-management, A-acceptance, R-responsibility, R-respect, I-institution, A-agreement, G-generation and E-educate. “How many people does it take to stay married?,” asked Lanshima. Someone answered “One. My future mother-in-law” to much laughter. Lanshima, smiling, slightly corrected him, “I was going to say three, you two and Jesus Christ, but maybe it’s four.”

Jennifer Grayson, a Senior Financial Advisor at Merrill Lynch and parishioner at Blessed Sacrament Church, Savannah, made her PreCana retreat debut Friday night and closed the evening by educating the couples on financial concerns in a marriage. Grayson, who is married, said, “Money is one of the things in a marriage that can be a big deal. It’s really important before you get to the point of marriage you discuss how you’re going to manage your money.”

She recommended saving at least three months of income, renting instead of immediately buying a home and having a joint bank account for bill paying instead of the common mistake of assigning certain bills to one another. “I think the primary operation budget should be a joint savings account,” said Grayson.

“Both people in a marriage should know about the finances,” said Grayson who offered her email and cellphone number to anyone that was interested in continuing this conversation at a later date.

Day two of the retreat began with breakfast and included a discussion on communication from the Fritts, natural family planning, interfaith marriages, spiritual dimensions of marriage, marital intimacy from the Kennedys, and the importance of prayer by the Santores. Each couple received a certificate upon complication and much more in regards to tools for what is to come. “We don’t want to support you for now, we want to support your marriage for a lifetime,” said Director of the Office of Marriage, Family and Respect Life Jayne MJ Stefanic. “Your wedding day is for a day, your marriage is for a lifetime.”