The Diocese of Savannah ordained five new members of the clergy this year, two as transitional deacons and three to the priesthood.

The diaconate and priestly ordinations, held May 29 and June 5 respectively, allowed full access to the Cathedral Basilica of Saint John the Baptist, Savannah, the first major diocesan events to do so since 2020’s COVID pandemic.
Among the recently ordained are transitional deacons Esteban Mallar and William Cook, and the new priests Nathanael Swann, Emmanuel Antwi and Christopher Awiliba.

“When we look for young men to join the seminary, we’re looking for men that are able to connect with a variety of people,” said Father Pablo Migone, director of vocations. “A big thing in the seminary world is cultural competency: are our guys able to engage and understand others?”
For Esteban Mallar, Migone believes this will be easy, as his affability allows him to connect easily with anyone, especially the youth of the diocese.

“He has shown in his various parish assignments that he is very effective working with young people,” Migone says. “He has a way of connecting with them that it’s not about himself but about Christ and bringing him to them.”
Among the ordinandi, Mallar is the only one to have been born and raised in the Diocese of Savannah.

Deacon Will Cook has a similar connective ability. Both the Diocese of Savannah and the Diocese of the U.S. Military sponsored Cook after he had served four years in the U.S. Marine Corps.
Throughout college and his military service, Cook felt the call to the priesthood, but finally took a chance on faith. He decided to immerse himself in God’s mission.

“When I was in the military, I began to take my faith more seriously,” said Cook. “I matured and then I did a year of mission work with the Salesians, and I lived in a community with priests and brothers. It was eye-opening to get to know them and see that they’re just normal guys doing their best.”
Thus began Cook’s six-year journey to becoming a transitional deacon.

The Diocese’s new priests have had lengthy journeys as well. For Fathers Antwi and Awiliba, this is quite literal. 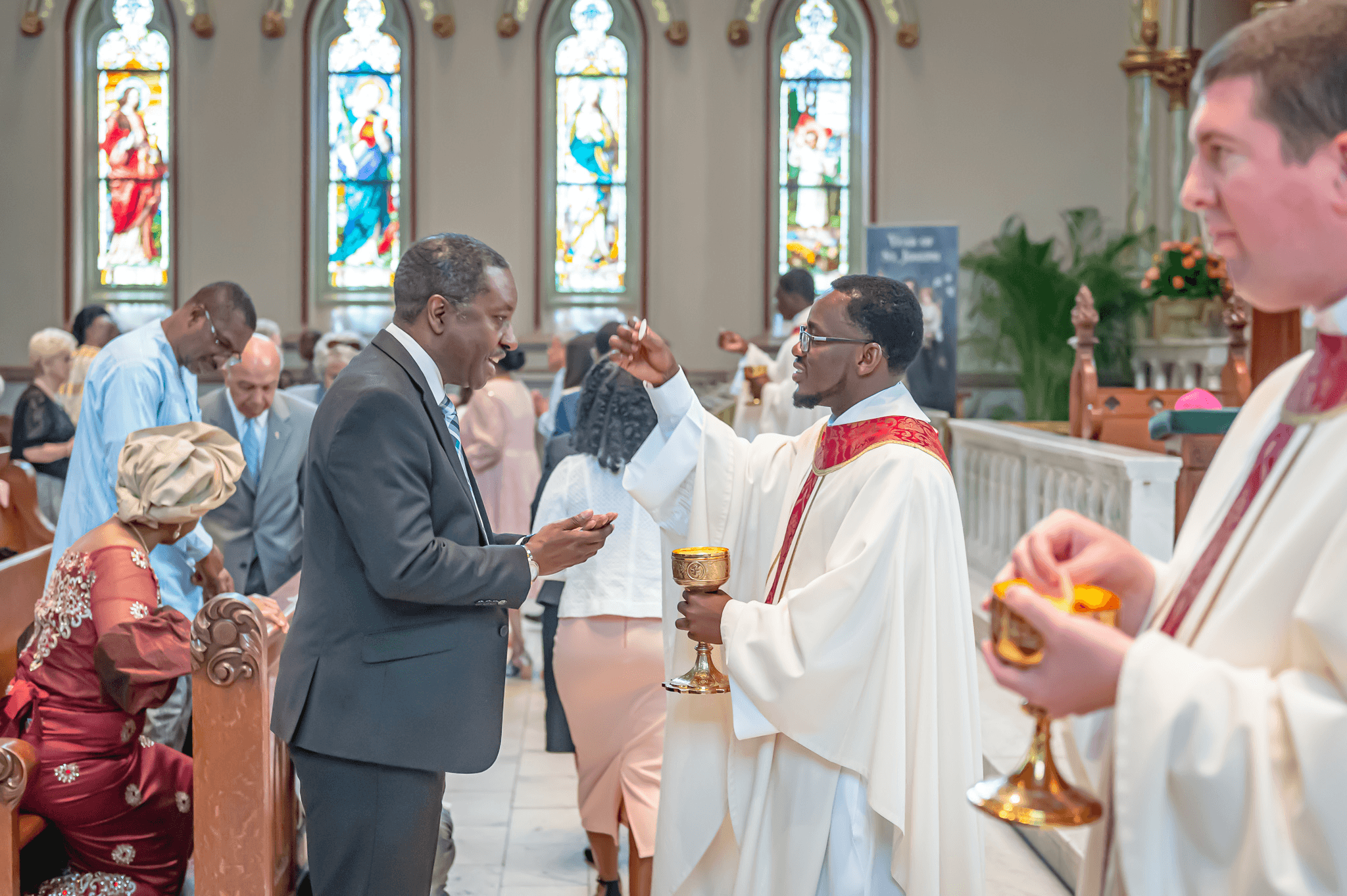 Antwi and Awiliba are each from Ghana, hailing from the Archdiocese of Kumasi, one of the largest in Africa. They are two of the Savannah Diocese’s 15 priests from Africa. Awiliba had been a schoolteacher before choosing to serve God, whereas Antwi had always felt a call to the clergy, having been involved in the church since his days at St. James Minor Seminary.

Swann’s trip was physically shorter—he was born in Delaware—but with just as much variance. He moved to Virginia Beach and stayed in Virginia for college, attending Virginia Wesleyan and Virginia Tech before relocating to Georgia for work where his path to priesthood became clearer.

“Some argue that, more and more, it’s a ‘post-Christian’ world,” said Father Migone. “So we need men that not only understand different cultures and different people, but can speak the Gospel to a younger demographic that doesn’t see the Gospel and the message of God as pertinent.”

Migone said that three more young men from the Diocese had been accepted into seminary. The Diocese currently has 10 seminarians and anticipates ordinations each year for the next five years. Next June, Mallar and Cook are scheduled to be ordained to the priesthood
This year’s ordinations were Bishop Stephen Parkes’ first as Bishop of Savannah. He said the process has helped him connect more with the seminary and with God.

“I felt it was very graceful to be very close with God, the Father, Son and especially the Holy Spirit on the altar,” Bishop Parkes said. “I found myself, in my own prayer, really reaching out to them [the ordinandi], to pray for them, that they have a ministry that brings great joy and fulfillment.”
Bishop Parkes has assigned Antwi to St. Joseph’s Church, Macon, Awiliba to St. Joseph’s church, Augusta, and Swann to Blessed Sacrament Church, Savannah. Each begins their priestly assignments July 1, 2021. SC

For Southern Cross coverage of both ordinations, including livestream footage, video highlights, photo galleries and Bishop Parkes’ homilies, go to http://southerncross-sav.org and click on “SPECIAL FEATURES.”