Movie Night at St. Michael's helps bring parishioners back together 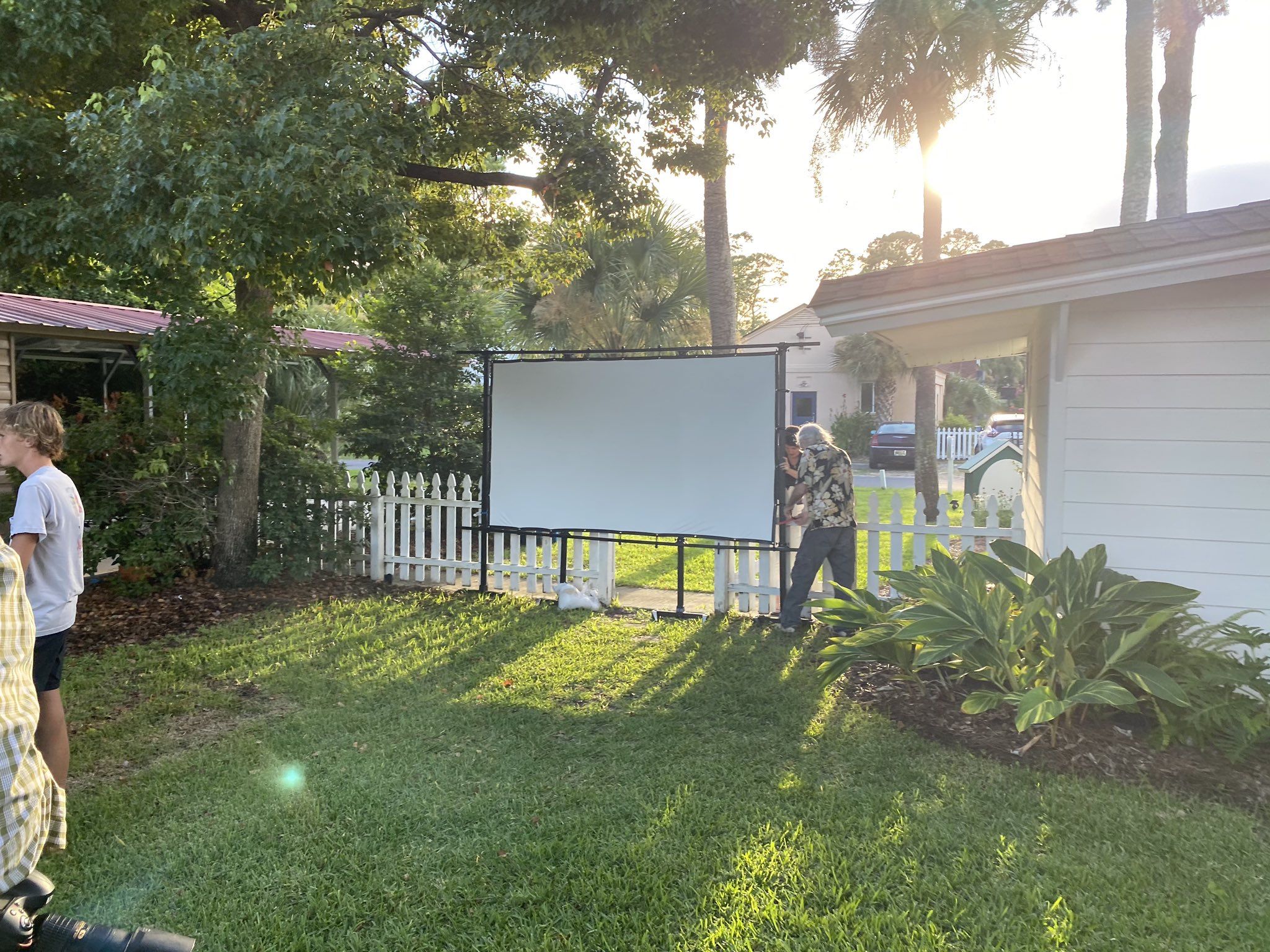 A projector screen is put up in courtyard at St. Michael's Church, Tybee Island. Photograph by Donnell Suggs

TYBEE ISLAND, GA. -  The sun wasn't scheduled to set for another hour and that would be enough time for St. Michael's Church, Tybee Island parishioners Bill and Delia Robinson to finish setting up the projector. Comedian Jim Gaffigan would be the star of the evening, a comedy special starring the Catholic father and husband was preparing to be queued up. They got help from a father-son team who helped moved a table and chairs into position. Fellow parishioners, and in one case the son of a long time parishioner who dropped by before leaving town for his home in Alabama, made their way to spots on the church's small front lawn. Fold-out beach chairs, the type with cup holders already built in, were strategically placed within six-feet of one another with very few exceptions. Masks were being worn and Father Jerry Ragan, the pastor at St. Michael's, was on hand to make sure things stayed that way. "I'm just tickled that you all are here," he said after ringing a bell in order to get the attention of the two dozen people in attendance. "There's only so much social isolation that we can take."

Sponsored by the Holy Name Society, a men's group at the parish, "St. Michael's Night Out" normally takes place at one of the local restaurants in town. "Every month we would grab a couple of tables, get some food, stuff like that," said Bill Robinson, the head usher at the parish. The two-dozen or so many people on hand would eat, drink and be merry, taking time to fellowship while patronizing a local business. With COVID-19 changing the way people gather these days, the idea of having a movie night could not have come at a better time. "This is the first time, it's something new we're just trying," added Delia Robinson, the parish office manager.

"We thought about doing it outside to encourage social-distancing," said Ragan about hosting the movie night. "It's really hard to keep a community together when you can't gather together." St. Michael's has ceased to have in-person Mass this month and will resume celebrating Mass within the parish sanctuary next month, Saturday, August 1. Movie night was one of the few times that parishioners got a chance to see one another en masse. For parishioners like Drew Covar, a Vietnam and United States Navy veteran, the crowd was better than expected but smaller than the previous gatherings have been. "We've had as many as 60-65 people, then it was at least 40 people, it was great," he said. A successful first movie night might bring more people out next month, but Monday night's crowd fit the social-distancing requirements well.

Parishioners and guests sat along the brick wall adjacent to the church's small parking lot and along the wall of the parish. Others sat several feet from the screen. Along with tiki torches helping keep the gnats away, sweet tea, potato chips and chocolates were provided for anyone interested in a snack while watching. Prior to the comedy special beginning, music was provided by parish music director Ryan Beke. The acoustic guitar rhythms made for excellent background sound and paired well with the multiple conversations taking place. "I hope this comes off as cool," said Beck, one of the event organizers. "We're just trying to find new ways to be socially-distant while still being together."

Ragan took a few moments to engage the crowd with some Catholic trivia true-or-false questions, one of which was if they knew there was a Saint Corona? (Answer: Yes, she is especially venerated in Austria and Bavaria as the patron Saint against epidemics and of treasure hunters.) Again he thanked them for coming out for what looks like the first of more St. Michael's Movie Nights to come. "It's good to be together," he said.

A parishioner who only identified himself as "Paul" agreed. "The whole idea is to build a faith community. If you don't support each other you don't have anything."

Parish council president and longtime parishioner Michael E. Beytagh, chips and tea in hand said about the need to get together after weeks away from Mass, "We were getting stale, we had to get something going.”