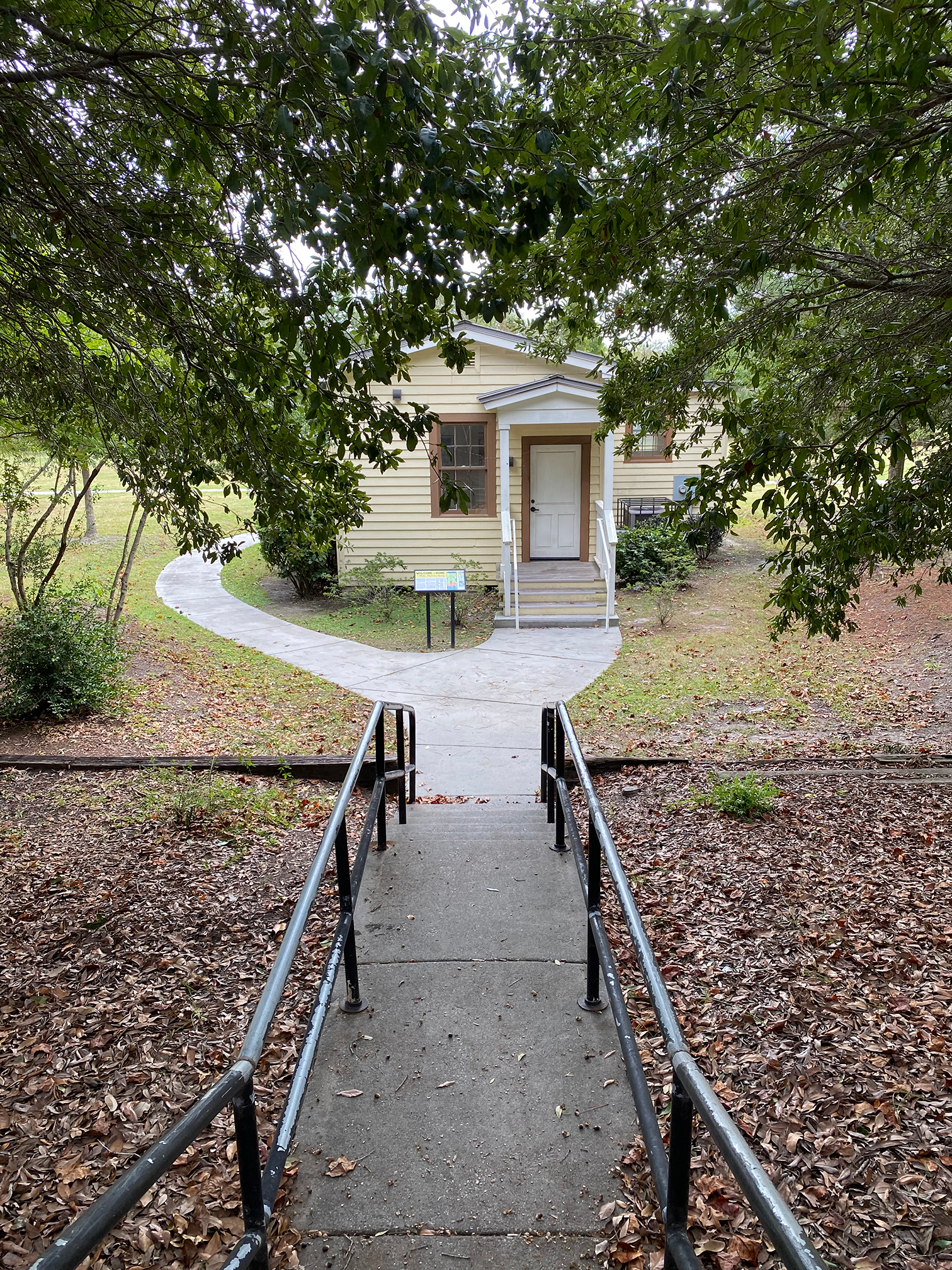 The Mother Mathilda Beasley cabin now rests in the public park that bears her name in Savannah. Photograph by Donnell Suggs.

Beasley, Georgia’s first Black nun, continues to be a popular religious figure and example of sacrifice and selflessness, particularly when it comes to education. The historic site, prior to COVID-19, was one of the more popular free tourist locales in the city. On this day, however the Southern Cross was allowed to take a look around the cottage, which was moved to its current site on May 24, 2014. Chatham County Parks and Recreation Community Outreach recreation leader Adrienne L. Derien-Roach believes the cabin serves an important purpose to the community at large. “Today [Mother Mathilda Beasley’s] legacy serves as an inspiration to many in Savannah of what a person can become despite challenging circumstances,” she wrote in an email to the Southern Cross. “Keeping her memory alive by way of her cottage is important. It serves as a reminder to always strive to offer the very best of ourselves.”

Until her death in 1903, Beasley had dedicated her life to bettering the lives of Black Catholics, Black people and those within the Diocese of Savannah. Though many, her missions revolved around education, and even though there were nationwide rules against teaching Black citizens of the United States and more specifically, Savannah, how to read and write, Beasley heroically continued her work doing so in secret in many cases. In the cottage, there are plaques stationed throughout the three rooms for visitors to follow Beasley’s lifeline and work in the Diocese.

Starting with a church, school and home for Black children at Sacred Heart Church, Savannah -a marker highlighting her work remains on the parish grounds- Beasley was a forebear of a Black Catholic community. St. Benedict the Moor Church was built exclusively for the Black parishioners, the first parish of its kind in Savannah. She would also manage the Sacred Heart Orphanage (1891), the city’s first orphanage for Black children. Beasley, who founded the Third Order of St. Francis in 1889, the state’s first order of Black nuns. Beasley became Superior four years later in 1893. The orphanage was known to have between 30-40 children, then known as “colored waifs,” living there at a single time.

A city greenspace, Mother Mathilda Beasley Park, was dedicated and named in her honor in 1982. The Savannah College of Art and Design (SCAD) later honored her works as a “Woman of Vision,” installing her bust in Arnold Hall.

Born on November 14, 1832, in New Orleans, Mathilda (Taylor) was raised a slave and baptized into the Catholic faith four months later by the Archdiocese of New Orleans Rev. A. Mascaroni. Her Catholic faith would serve her well as she moved to Savannah as a young woman, eventually marrying local business owner Abraham Beasley at 37 on February 9, 1869. Following her husband’s passing in 1877, Beasley donated what has been referred to as “her wealth” in a number of historical and archival documents and books to the Catholic church. She would dedicate the remainder of her life to the church and to educating Black youth.