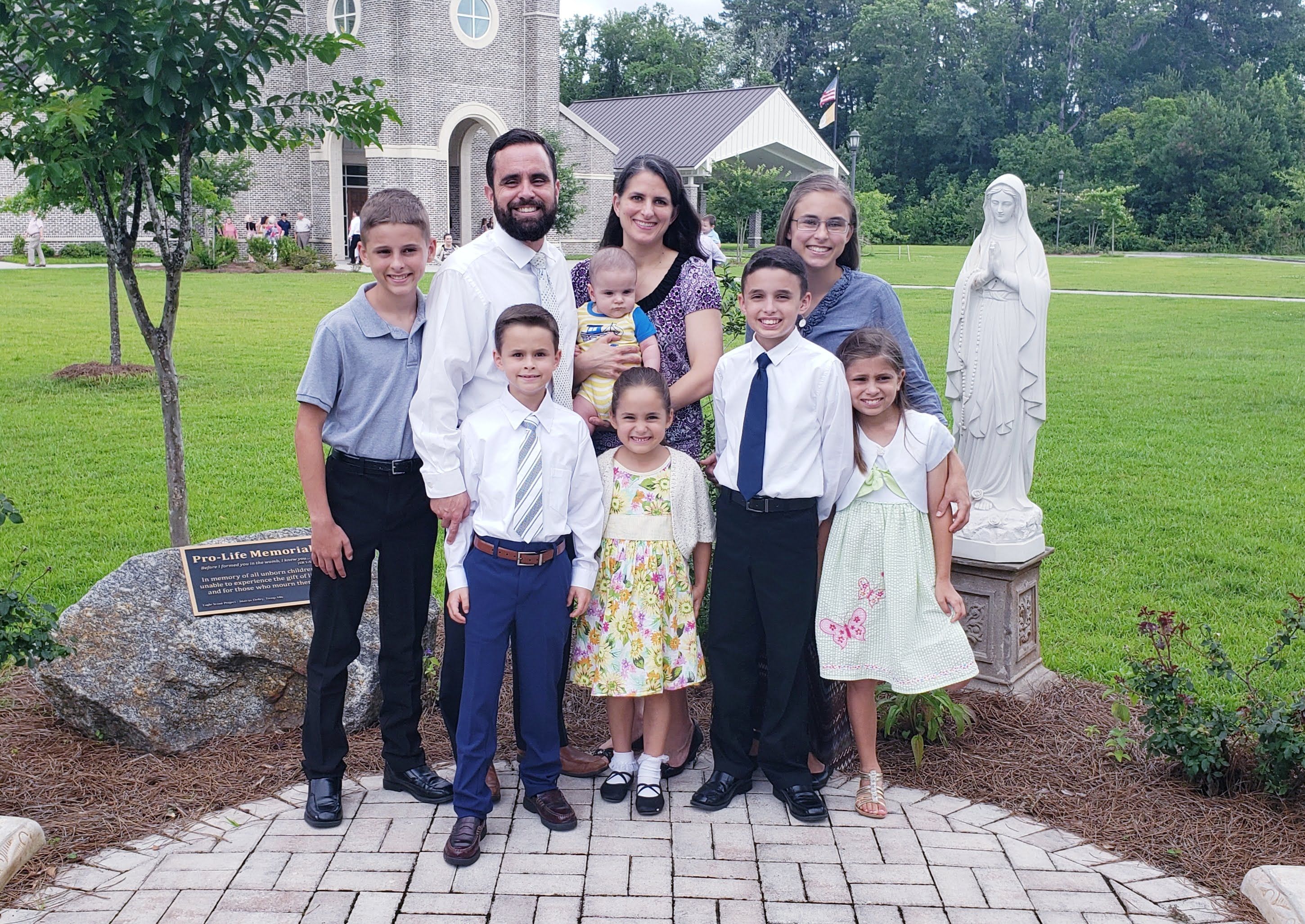 The email didn’t make it to Brent Stubbs’ phone or desktop computer over the weekend but St. Anne Church, Richmond Hill pastor Father Allen Joseph McDonald found a more direct way to get the message to the longtime parishioner. He stopped him after 8 am Mass Sunday and told him the Southern Cross was looking to speak to him for our “Meet a Catholic” series. “I was the only one to get the email so I forwarded it to Brent,” said McDonald about using word of mouth to “forward” the message. Communication remains the key to getting messages across and for Stubbs, a husband and father of seven children, the oldest being 14 year-old Leah and the youngest being nine-month old Drew. In between them are Dean (13 years old), Jude (11), Gemma (9) Luke (8) and Claire (6), that remains true. He and his wife Danielle have plenty of opportunities to practice what they preach. “It’s constant,” said Stubbs of communication between him and his family. “Constant communication, constant prayer, constantly communicating about what we need to do as a family and that prayer becomes the thing that helps execute everything we do.”

The family recently had a staycation in which they spent a week together at home, no work, no school, just fun. They also have monthly family meetings that are as detailed and organized as some of the meetings Stubbs has at work as college administrator. His 15 years as an educator coming in handy for moments like these.

Raising seven kids, at various stages in their lives, is something that “Never has a dull second” according to Stubbs. “I really enjoy it, I really do.” He used an example of their family house being three bedrooms, two bathrooms and saying the average family house 60-plus years ago was smaller but the families were bigger compared to today. “For us we love people. People see us and say ‘Boy your hands look full’ and I like to say everybody’s hands are full, you just decide what you fill them with.”

“A business can have two employees or 100 employees and it’s not necessarily true that the business with 100 employees is more stressful,” said Stubbs with a laugh. “It’s a lot of fun and we enjoy it, but it is a sacrifice.”

The Stubbs’ came to the Catholicism from the Protestant faith in 2007, first joining Catholic church at St. Lukes Church, Irving, Texas, before moving to Georgia. Asked why he and Danielle decided to become Catholics Stubbs said, “It started out as us looking to answer some really important questions that ultimately led to me understanding that my children would be the inheritors of our beliefs. What could I reliably hand off to my children that has stood the test of time and isn’t set to expire? So that was how the journey started. When you come into the church it feels like the finishing of a journey but it’s really just the beginning. At St. Anne, we are very thankful for a parish where we really connect.”

The Stubbs kids are enjoying worshipping at St. Anne as well. “Our kids are very at home in the parish and they are involved with all the things that go on in the parish, whether it’s altar serving or as a cantor. We look back at our childhoods and church was home and we see that too with our kids.”

Father McDonald calls Stubbs “very active” in the parish as well and that may be an understatement. Stubbs is not only a member of the parish finance council but he also teaches Adult Religion Education Program. “He does a great job with that,” said Father McDonald. “Brent is very bright.”

Stubbs believes service is a very important part of worship. “It’s really up to us to work hard to build a church,” he said. “We have a role to play and I believe that role is to be extremely active. If this is the great love story where God comes and redeem us than we need to buy in and to go all in and get involved in that adventure, and the adventure is in community and in relationship and service to each other.”

“All of this boils down to responding to God’s call,” said Stubbs.

And the family meetings. Those don’t hurt either.