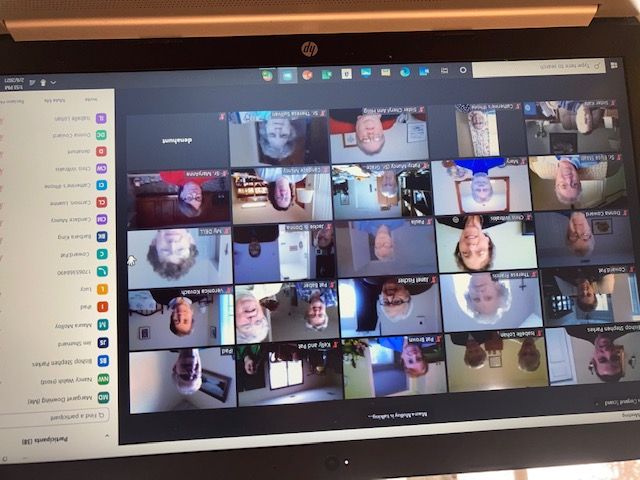 Sister Grace Marie Dillard RSM was born in Texas and moved as a child to the vicinity of Columbus GA.  She was educated at St. Joseph’s School in Columbus in what is now Holy Family parish.  During her years in ministry, she has been an educator and educational administrator at Mt. De Sales Academy in Macon and St. Anne-Pacelli School in Columbus, GA.  She served her community in leadership, then became Vice President for Mission Effectiveness at St. Joseph’s/Candler Health System.  Until the pandemic forced her to isolate, she was still volunteering at St. Joseph’s Hospital.  She has been in ministry in the Savannah and Baltimore dioceses. Sister Grace Marie has a sister and several relatives who live in Georgia.  She received the Marian Award of the diocese in 2020. She lives at Mercy Convent, Savannah.

She entered the Sisters of Mercy in Baltimore, MD.  She began teaching history at St. Vincent’s Academy, Savannah, in 1970.   Sister Beverly moved to St. Petersburg to care for her aging parents, and remained there, engaging in a variety of ministries.  Sister Beverly has maintained connections with some of her students from St. Vincent’s, and has strong relationships with her nieces and nephews. She has a love for animals, which they reciprocate. She currently resides at Mercy Convent, Savannah, and she can’t wait for the isolation to end!

I came to the Diocese of Savannah in 1982 at the invitation of Bishop Lessard to work on a Hispanic Ministry pastoral plan and live in Fort Valley.  Eventually I became diocesan director of Social Ministry which I loved and put me in contact with all the deaneries. Best memory is working on the immigration “amnesty” program with pastors and volunteers.  After a ten year pause to work in Buffalo, NY and Jackson, MS.  Sr. Mary Faith invited me to return in 2000 as Family Life Director and use the MSW the diocese enabled me to pursue at Catholic University of America. Those years were a special blessing of working with committed lay leaders.  Finally the circle was completed and I became Catholic Charities director until I retired in Feb 2019.

Social justice and care for the poor are the hallmarks of my community’s charism. As a Sister of St. Mary of Namur my international community has been the strongest support and spiritual guide for these 60 years.  It has been a time of grace and interconnectedness with prayerful, faithful people here in Georgia and around the world.  I feel truly blessed.

I am Sr. Theresa Bretthauer, a Missionary Servant of the Most Blessed Trinity.  We are an American Community founded over a hundred years ago to work for the preservation of the Faith and to develop a missionary spirit in all Catholics.

I have served from the Lower Eastside of Manhattan to the Mississippi Delta, from the coastal shores of Virginia to the villages and islands of Alaska.  In these missions I was privileged to develop lay leaders in our Church, working in parish religious education programs and diocesan offices enabling individuals to encounter the Lord.

In 2018, I came to Warner Robins as part of the Trinity Ministry Team to serve in the Diocese of Savannah, offering programs to parishes, schools and other groups for the development of missionary discipleship.

I hope this is what you were looking for... let me know if I need to change something.

Sister Susan Harms, RSM is a fourth generation Savannanian, who grew up in Ardsley Park and attended Blessed Sacrament School and St. Vincent's Academy prior to entering the Sisters of Mercy in 1960. She graduated with a BA degree in Education from Mount St. Agnes College in Baltimore, Maryland.  Later Sister Susan received a MEd as a Reading Specialists from Georgia State University in Atlanta. Sister Susan first taught at St. Joseph's School in Macon, GA, then in Mobile, AL, Atlanta, GA., and at Nativity Of Our Lord School in Thunderbolt.  For the last 47years and currently she teaches at St. Peter the Apostle School on Wilmington Island.  Sister Susan presently serves on the Foundations Board of St. Joseph's/Candler Hospital and the St. Vincent's Academy School Board.

I was born in Co. Galway, Ireland.  After completing novitiate and making profession of vows in Rome, I came to the United States in 1960.

My first assignment was to the USA and after a few years of teaching I felt called to serve in foreign missions, firstly to Egypt in the field of education. Most of the students were of the Moslem faith and about one-third were Christian, mainly Orthodox. It was a very enriching experience living in a country of pyramids and mosques plus several Christian Churches of all denominations.

The Christians suffered in many ways just for being Christian. Their name indicated their religion and suffered accordingly but would NEVER change it which showed their strong commitment to Jesus. The Moslems were equally devoted to their faith and frequently said they felt sorry for us, Sisters, regarding us heathens and therefore lost. However, they appreciated our dedication to God in leaving family and country to help them improve their status in life. What gave me the greatest joy was praying with Moslems and Christians every morning. Frequently I used a short passage from Scripture or from the Koran and at the end of the prayer ask the students from which book did I read.  Invariably they picked the wrong book.  My desire was to focus on our unity in One God.

Another Missionary experience I had was being in Papua New Guinea for nine years as a member of the formation team.  I felt I was in the early Church while there.  Most of the people in the northern part of the country were second generation Christians but how they loved their faith. And they lived such very simple lives.  Most of the adults died before they were fifty (50) due to malnutrition and/or affected by diseases, mainly malaria. They were so very grateful to God for what they had and always lived with hope – that ‘tomorrow may be better’.

In 2000 I returned to the USA – to Georgia - to further the mission of our Foundress, Elizabeth Hayes, which started in 1878 so I felt I was now living in ‘Holy Ground’. My ministry has been Pastoral Assistant. Being in  multi-cultural parish in Savannah, (Sacred Heart)  and now at St. Joseph in Augusta I feel I am still on a ‘foreign’ mission which I love and I continue to thank God for these marvelous experiences.

Sister Catherine Mc Elroy was born and raised in Philadelphia, PA. , the second of 1 eight children She attended Catholic schools for primary and secondary education.  Sister entered the Congregation of the Sisters, Servants of the Immaculate Heart of Mary on July 16, 1957, and was professed on January 16, 1960.

Commenting on her years as a professed religious, Sister states that she has received more than the hundredfold promised by the Lord to those who give up all to follow Him. She can relate many instances in her life that testify to the fact that the Lord is never outdone in generosity.

Sister has had many ministerial roles throughout her religious.  She started  in Philadelphia, teaching the  elementary grades.  In Harrisburg and Arlington, Va. she moved to high school where she taught Latin.  After she retired from the classroom, Sister served as a campus minister for a time before being missioned in Lima, Peru, where she helped the youngest children and their teachers with English. Five years ago she came to St. James in Savannah where she provides math support and serves as the sacramental coordinator.

Sister Gilmary (Trudy) O’Hayer RSM   Sr. Trudy grew up in Savannah, and was educated at the Cathedral School and Saint Vincent’s Academy.  She entered the Sisters of Mercy in Baltimore, MD in 1961.  After her novitiate she was missioned to teach for six years in schools in Atlanta, GA.  She then became principal at St. Anne-Pacelli School in Columbus GA. Next she spent 2 and a half years at St. James school in Hopewell, VA, then returned to the Savannah diocese.   She has spent the last 40 years at St. Vincent’s Academy, Savannah.  Sister Trudy serves on the Committee for the Marian Award of the Savannah diocese.  She also oversees a vacation house for the Mercy Community on Tybee Island.

I am Sister Christine Wiltrakis, living in Warner Robins GA.

For 60 years I have had the joy of being a Missionary Servant of the Most Blessed Trinity – a member of a missionary family serving the Church for over 100 years. Our Sisters, priests and Brothers were founded just across the Georgia / Alabama border in Holy Trinity, AL, near Phenix City and Columbus.

This journey has blessed me with ministries in Catholic Social Services, parish and diocesan religious education, retreat team and spiritual direction from Coast to Coast.   The highlight of these mission experiences were two trips to the country of Latvia soon after it won freedom and independence from the USSR.  We were sent by the United States Council of Bishops to train school teachers as catechists in the public schools, where instruction in various denominations were most welcome.

I now serve as part of the Trinity Ministries team, offering retreats and days of reflection and also formation as missionary disciples to any groups within the Diocese of Savannah.

Most of my 50 years in missionary life has been serving God’s people in the South.  I am a Missionary Servant of the Most Blessed Trinity, serving for the past two and a half years in the Diocese of Savannah.  Over the years, my ministry has mostly been in parish work, faith formation, retreat work and outreach.  I have had the privilege of working among people of various cultures, races and religions in Puerto Rico, Pennsylvania, Massachusetts, Virginia, Alabama, Mississippi and Georgia.  My whole life has been filled with blessings

Although Covid 19 has limited my activities, I have been happy to meet and work among people in St. Juliana Parish in Fort Valley in an ESL program, Sacred Heart Parish in Warner Robins in outreach, St. Patrick Parish in Kathleen visiting the homebound, Our Lady of Lourdes Parish in Columbus in faith formation.  My whole life has been filled with blessings as our Triune God calls, guides and inspires me.