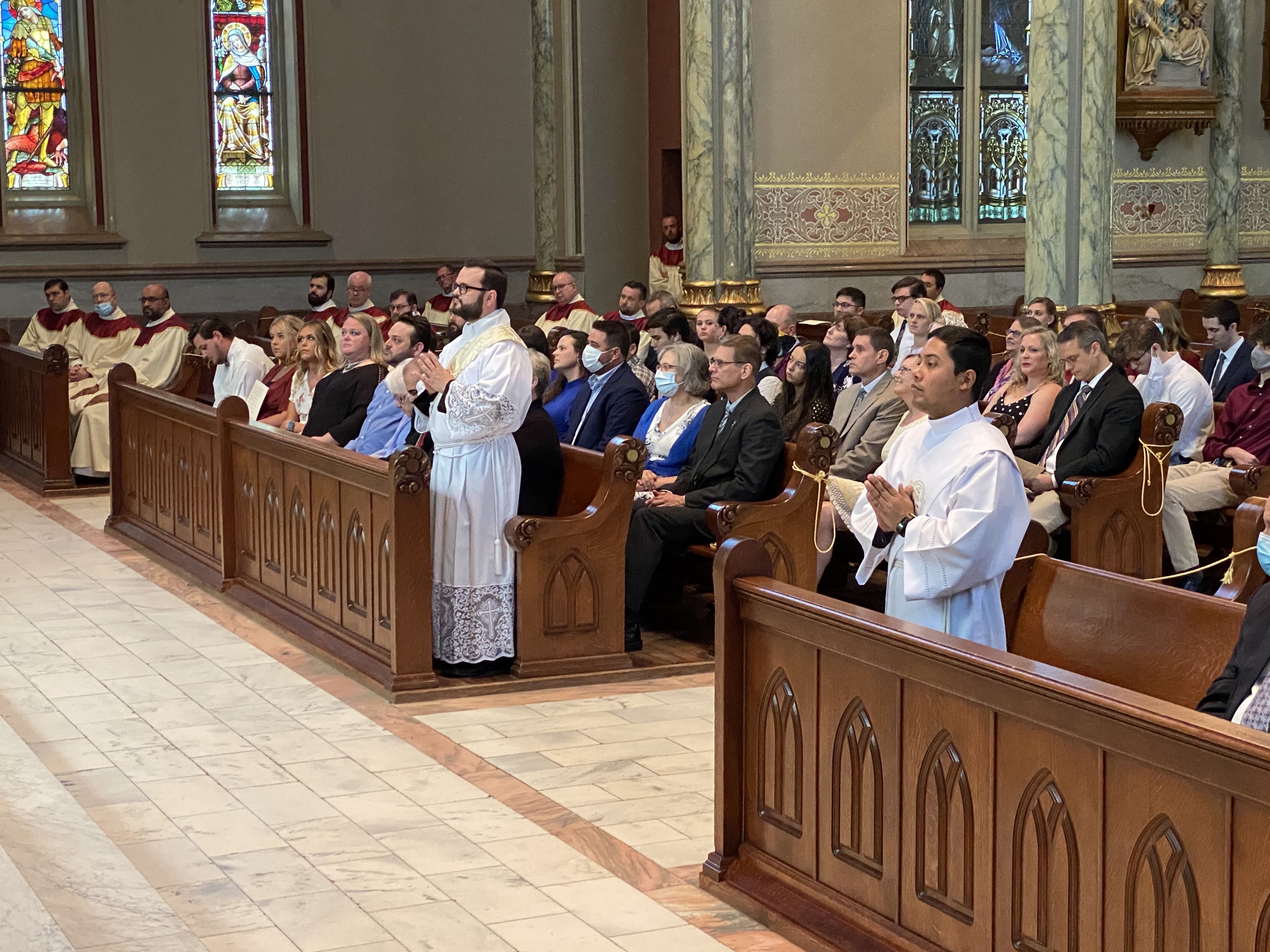 Fathers Carlos Rivero (right) and Robert Phillips (far left) stand along with parishioners at Cathedral Basilica of St. John the Baptist, Savannah during the Ordination to the Priesthood Saturday morning. Photograph by Donnell Suggs

SAVANNAH, Ga.- Deacon Carlos Andres Rivero Murcia could not find his way into Cathedral Basilica of St. John the Baptist Church, Savannah, early Saturday morning. He had plenty of time before he and fellow deacon Robert Anthony Phillips were to be ordained priests later that morning but with his hands full, he carried with him a crisp white suplice, black shoes and other items, and mind on the extraordinary achievement ahead, he was in a hurry to get inside. “I think we have to go in through the rectory,” he said with a smile.

Rivero and Phillips, after years of study and a year as transitional deacons, were ordained priests Saturday, June 20, the day of Memorial of the Immaculate Heart of the Blessed Virgin Mary, in front of family, friends, and among their fellow brothers in faith. More than two dozen priests were also in attendance. Presiding over the ceremony was Diocese of Atlanta Archbishop Gregory J. Hartmayer OFM Conv. who during his Homily said to Rivero and Phillips, “It is the Holy Spirit that has led you here. This occasion, this moment, is especially dear to me because we were together from the beginning.

“My dear brothers, you have chosen the Memorial of the Immaculate Heart of the Blessed Virgin Mary on which to be ordained. Carlos and Robert, Mary’s life journey is not unlike your own. You also have chosen to do the will of God. My sons you too will exercise the sacred duty of teaching in the name of Christ the teacher. See that you believe what you read, teach what you believe and practice what you teach.”

“It is in the Eucharist that you will find the strength to sacrifice yourself.”

A loud applause filled the Basilica following the Election of the Candidates, the moment when the candidates were called forward. During the Promise of the Elect which followed, when both Rivero and Phillips were to declare their resolve to serve the people of God as priests, both were loud and clear in their intentions.

The pair were vested in stole and chasuble by fellow priests and were anointed by Archbishop Hartmeyer during the Anointing of Hands and Handing Over of Bread and Wine. Bishop Emeritus J. Kevin Boland and Archbishop Hartmayer proceeded with the Fraternal Kiss of Peace, welcoming the pair into the priesthood, before the Preparation of the Altar took place.

Phillips has been assigned to serve the parishioners at St. Anne Church, Richmond Hill and Rivero, who had made many friends and familial-like relationships while working as a deacon at St. Francis Cabrini Church, Savannah, will begin his priesthood at St. Theresa of Avila Church, Grovetown. Both could barely hide their smiles during the Laying of the Hands and Prayer of Ordination that followed. Kneeling before Archbishop Hartmayer, the joy of accomplishing life-long goals was clear and present.

Asked how he felt following the Ordination Rivero, this time with his hands full of gifts he had just received from well-wishers said, “I am so blessed, so unworthy but so blessed. I know the huge gift that is the priesthood.”

Catherine and John Folkerts, who represented what they called Rivero’s “American parents”, sat in the front row as Rivero’s representatives. Following the Ordination Catherine said, “I kept crying, it was a beautiful experience, we have known him through this entire journey and we’re blessed to have him as a priest.”

Phillips, surrounded by family that included his parents Bill and Karin Phillips, and his six brothers and sisters, said of his first day as a priest, “I’m very excited, I’m feeling lots of joy, there has been lots of smiling, lots of family around. I have a huge family and it’s great to have them here.”

His family expressed similar feelings following the Ordination. “It’s overwhelming,” said Bill Phillips, who admitted he was brought to tears during the Ordination, about his son becoming a priest. “It’s just a real blessing. Robert is such a good man with a good heart. I’m honored to be his father.”

“For him to finally achieve his goal, I’m just really happy for him,” said younger brother John. “You can tell this is really what he wants to do and has the conviction to do.”

“It’s pretty exciting,” remarked brother-in-law Tony Cummings. “You can tell it’s meant to be when it brings out the excitement in him. This is clearly what he is meant to be.”

Shouts of “Father Carlito, Father Carlito” rang out from a small group of visitors as Father Carlos Rivero, his name typically shortened in the American manner of first name/surname tradition, took the steps of the Basilica two at a time. He was still in a hurry to get inside, this time as a priest.