Feast of Our Lady of Guadalupe

Feast of Our Lady of Guadalupe brings Bishop, hundreds to Sand Hill to celebrate 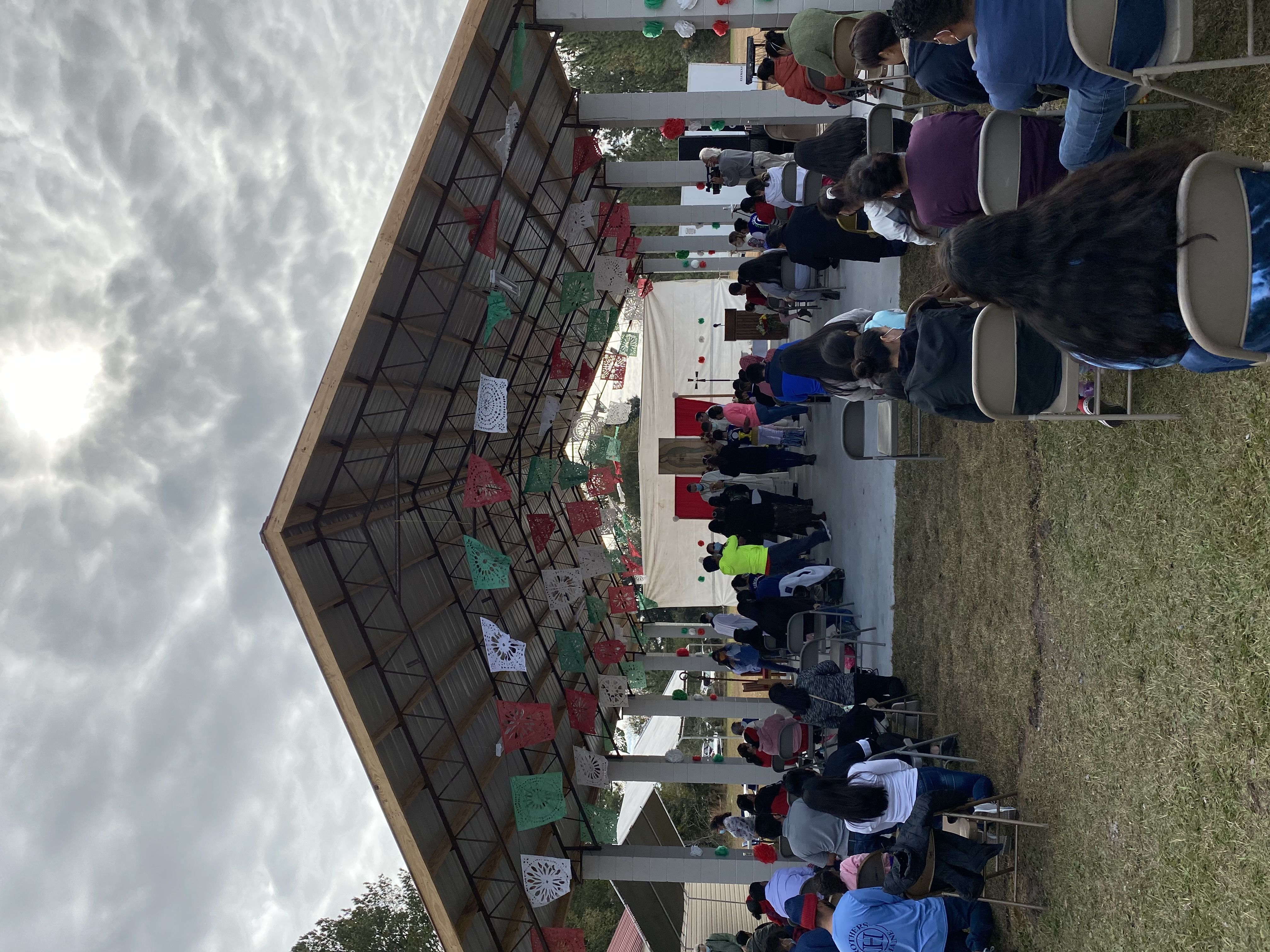 Sand Hill, Ga.- Father Vincente Terrazas, the pastor at Our Lady of Guadalupe Church, Sand Hill and the Parochial Administrator for a quartet of parishes in the area greeted Bishop of Savannah Stephen Parkes and Diocese of Savannah Chancellor Father Pablo Migone.

The procession was getting ready to leave the gas station starting point in Glennville to begin making their way down Highway 196 towards Hinesville and ultimately to Our Lady of Guadalupe Church in Sand Hill, a small, most Hispanic unincorporated town in Carroll County.

This procession of faith is part of the Hispanic Catholic tradition honoring the Feast of Our Lady of Guadalupe. Every December 12, the apparition of the Virgin Mary to Juan Diego. Mary’s image miraculously appeared on Juan Diego’s cloak in Guadalupe, Mexico in 1531, has since been an image of faith and a source of pride for Mexicans worldwide.

The parishioners at Our Lady of Guadalupe Church, St. Jude Church, Glenville, St. Stephen, First Martyr Church and Holy Cross Church, Claxton are no exception. More than 100 parishioners from all four parishes participated in the procession while nearly another 100 waited for them in Sand Hill. Father Terrazas expected as much. “It is important to be here today because our Lady is our patron,” said Terrazas, who is of Mexican descent. “The majority of people here today come from Mexico, and this is a very important day for them. This one day of the year is very special.”

Under a robin egg blue sky, a group of young men and women dressed in feather headdresses and navy blue and gold suede vests that read “Nuestra Señora De Guadalupe” in white letters on the back followed a slow-moving Long County Sheriff’s Department vehicle escort. A red Ford F-150 STX pickup pulled a trailer that had 13-year old Andy Perez dressed as Juan Diego inside. Asked if he was proud to be playing the legendary character for the day Perez, a student at nearby Long County Middle School said he was. “We are honoring Mary this day, and it’s important because Jesus died for us, and we are honoring his mother.” A smoke grey Chevy Suburban came soon after with a woman leading the Rosary in Spanish through a loudspeaker.

Another trailer full of children was being pulled down the road while fireworks were going off at the back of the line. It was a celebration, a festive gathering of the faithful during a liturgical year like no other before it. “December 12 is the last day she appeared to Juan Diego and we celebrate that,” said Santos.Santos, who along with his wife Maura, son Jean Bill “JB”, daughter Estrella (whose name in Spanish translates to “Star”) and a few other musicians made up the musical entertainment for the day. “The Holy Virgin Mary appeared in Mexico and stepped on the head of the serpent.” The Virgin Mary is depicted often with her right foot crushing a serpent’s head, and that image was seen on a number of t-shirts and works of art being worn and carried by people on the procession to Mass.

During Mass Bishop Parkes, who was making his first visit to Our Lady of Guadalupe Church, concelebrated the Mass with Fathers Terrazas and Migone in Spanish. Of the hundreds of parishioners in attendance, the Long Family, Anglo-English speaking Catholics, sat on a slight rise near the outdoor sanctuary participated in the Mass. Michael, Madelyn, nine months pregnant with a baby girl, and infant Joseph are parishioners at St. Jude but wanted to make a trip over to Our Lady of Guadalupe to witness the annual celebration. It was their first time. “It’s so beautiful and festive,” said Madelyn.

Following Mass, parishioners gathered under a trio of tents and partook in another annual tradition on the Feast of Our Lady of Guadalupe, eating. Along with the food and soft drinks were laughter and conversations in Spanish and English. The universal signs of a good time being had by all. “Now I’ll get to run over there and play tag with Angel and JB,” said Estrella, 6, who wore a blue and white dress. “Those are the colors of our country, El Salvador,” said Maura.