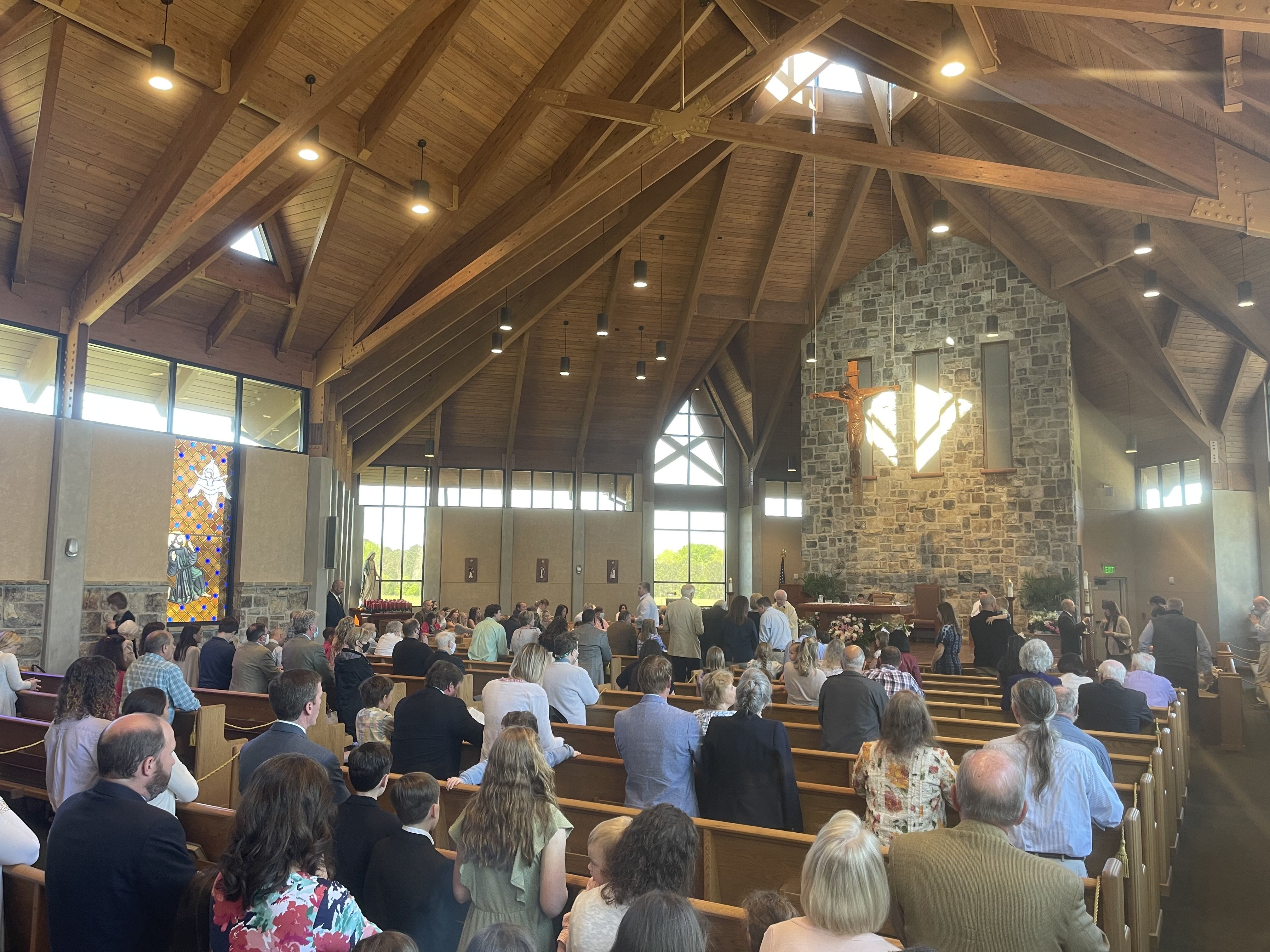 There was near-capacity attendance inside the sanctuary of Christ the King Church, Pine Mountain for Easter Mass, Sunday, April 4, 2021. Photograph by Donnell Suggs.

Pine Mountain, Ga.-The crucifix hanging above the altar inside the sanctuary of Christ the King Church, Pine Mountain is unique. Not because of it’s apparent beauty -it is in fact quite beautiful- or it’s size -it is indeed large- but rather because of what it is made of. The crucifix is made of Honduran mahogany, a rare and precious source of wood so precious in fact that according to wood-datebase.com there are restrictions to how much of it makes its way to the United States from Southern Mexico and Central America. “Isn’t it beautiful?,” asked Christ the King pastor Father John R. Madden. “You can’t get Honduran mahogany anymore.”

Christ the King Church had suffered a fire a few years ago and the crucifix in all of it’s symbolic and actual durability remained above the altar. Honduran mahogany, who knew?

The Easter Sunday Mass at Christ the King, Father Madden’s homily and the crucifix hanging above the altar with the help of a pair of steel cords are all about being risen. “Good morning, this is the day the Lord has made, let us rejoice and be glad in it,” said Madden to a capacity congregation. “Happy Easter. It’s an amazing day, I hope we all have joy in our hearts. This is a day like no other.”

Easter Masses took place all over the diocese and at Christ the King, where an overflow room had to be set up for what was a huge turnout of families and couples of all ages, the Mass had the feeling of a family gathering. “Easter ensures us that the future happens,” said Madden. “Those of us that have lost loved ones, we’ll be able to see them again. Death was not the end. Today we remember the final act in the Lord’s passion. I hope that you truly believe that.”

Madden told the congregation a story about watching a documentary where a comparison to Easter and Passover was discussed. In both religions, Catholicism and Judaism, Moses parts the Red Sea (in Hebrew the event is called Kriat Yam Suph) to help the Israelites escape slaughter from the Egyptians. The stories are different in many ways depending on what text you read but similar in how they ended. Madden’s point was simple: Moses was brave beyond belief. He was not afraid.

“It took a brave man to begin the process,” said Madden of Moses. “One brave man to believe God’s word. Fear not anxiety. Do not be afraid appears 365 times in the Old Testament. Let us always treasure this as we go forward in our lives.

Madden closed his homily with simple yet powerful advice. “Don’t get stuck here on Earth,” he said. “Cast your eyes on the journey home with God.”

Following his homily Madden asked all in attendance to renew the promise of Holy Baptism. A day earlier during Holy Saturday Mass a number of parishioners were baptized and Madden wanted to extend that opportunity to those in attendance. Along with other questions he asked the congregation, “Do you remove Satan and all his works?” and the congregation answered in unison, “I do.”

“Let us remember who we are,” said Madden. “We are sons and daughters of God and heirs to God’s Church. Let us not be afraid. I hope something you heard today will last longer than the Easter Bunny." Following that statement the laughter could be heard throughout the church.

Moments later Madden walked the nave of the church and sprinkled the congregation with the Holy Water he blessed the night before. As the Holy Water made its way from Madden's aspergil to the parishioners assembled throughout the church no one was afraid.