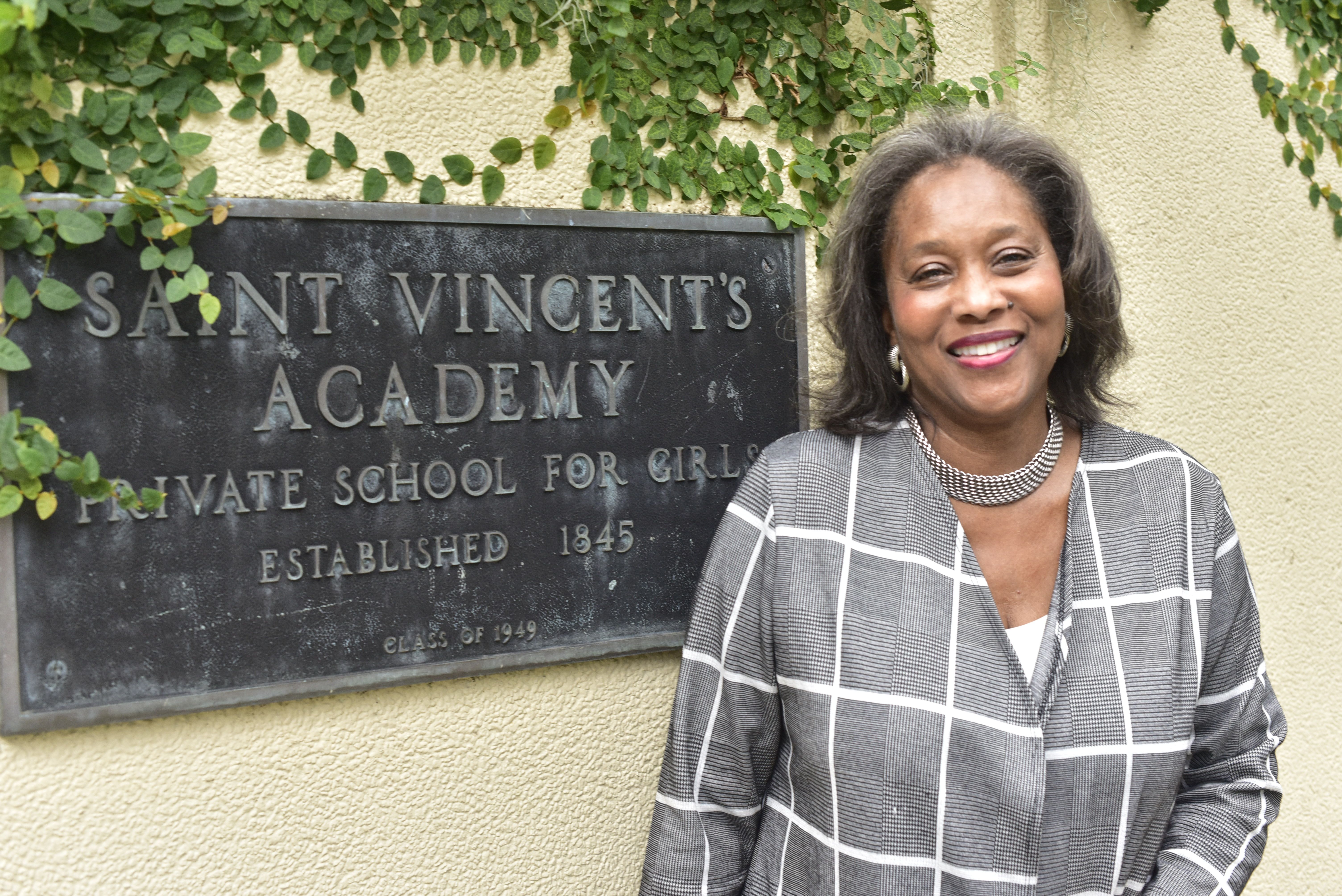 Mrs. Donna Myers, posed in front of St. Vincent's Academy, Savannah, was the school's first Black student when she entered as a freshman in 1964. Photograph by Donnell Suggs.

Savannah, Ga. - Donna Myers (Oliver) walked to the corner of Abercorn Street and East Oglethorpe Avenue and pointed her finger north. She described her after school walk from St. Vincent’s Academy (SVA) to the bus stop on Broughton Street. She remembered it like it was yesterday. “I walked Abercorn to Broughton, and in front of Levy Jewelers I would leave the group and then I would walk down Broughton to Friedman’s Jewelers on the corner of Whitaker and Broughton, and I would get a bus there to West Victory Drive,” said Myers, the first Black student in the 175-year history of the prestigious all-girls Catholic school. “Then I would take that bus home to Liberty City, my neighborhood.” Myers, a retired Chatham County educator and a member of the SVA Class of 1967, doesn’t get a chance to visit the school much these days, but despite the time away, couldn’t help but immediately remember stories from her high school days. She continued reminiscing. “At lunch, we could come outside and sit over there,” she pointed to a ledge on the side of the school building. “Or we could go to the bookstore across the street if we needed anything.”

Myers and two others, Veronica Johnson and the late O’Linda Douglas, were the first Black graduates of St. Vincent’s Academy, but for the first two years of her high school career, Myers was alone, the sole Black student at the school in 1964 and 1965. Whether she admits it or not, whether she agrees or not, she is a trailblazer for the Black students that attended after she walked through the doors. Today it would not be odd to see Black girls dressed in the white blouses and plaid skirts of St. Vincent’s crossing Liberty Street on their way to class or heading to Mass at the Cathedral Basilica of St. John the Baptist. In 1964 Donna Myers stood out in a much different Savannah, and for that matter America. “I went to St. Vincent’s with full knowledge that I would be the only Black girl in the school,” remembers Myers. “There was never a fear in my mind that I was less than or unprepared.”

A Savannah native, Myers likes to proudly refer to herself as a “generational Savannian.” Her father, Solomon Myers, Jr. is also a Savannian and attended the now closed Most Pure Heart of Mary Catholic School with other family members and Myers herself years later. Catholic school was in her plans long before she was born. Sister Mary Monica, a teacher at Most Pure Heart, had taught Myers’ father and uncles and then taught her. Moving over to a Catholic high school was the obvious next move for Myers, and it may have even been predestined. One day as she and her mother, a native of South Carolina, were driving around town and passed by St. Vincent’s, Myers remembered telling her mother that she would go to that school one day. Myers was oblivious to the fact that in the Jim Crow South, at least at that time, that would not be possible. A few short years later, following the Supreme Court’s 1964 Brown v. Board of Education decision outlawing school segregation, she would be preparing for her first day of classes at St. Vincent’s, breaking the color line at the school for good. “I don’t think I was sensitive about myself,” said Myers about being the only Black student in school. “I was not self-conscious.”

Asked if she was ever scared, she immediately responded, “I don’t have that kind of personality. This was the school my parents sent me to, and it was the school that prepared a young woman for society. Back then, you did what your parents told you to do, and St. Vincent’s was a school that aligned with their values.”

Ready for the Challenge

Myers has fond memories of her time at St. Vincent’s, readily admitting that she was received well by the nuns, the teachers, both lay and religious, and the students. A lot of what she learned about how to conduct herself came from her parents. Myers and her younger brother Solomon Myers III, 69, the oldest living Black graduate of Benedictine Military Academy (BC) and the second Black cadet to graduate from the school, were taught that they too had the right to earn a quality education. Academically the workload and expectations had not bothered Myers because the expectations for her to achieve high marks at home were just as high if not higher. “For me, there weren’t any academic difficulties,” said Myers. “I was the kind of student that would do what was asked of me. I never got in trouble growing up.”

Myers III remembers it being something his sister had to do and was “no big deal.” He said, “I don’t think it was a big deal to Donna and me growing up. To the adults, it must have been. Still, I don’t remember her being over-excited or it being a topic of discussion at the breakfast table.”

He continued, “I think it turned out to be a good experience for her. She got a good education and was prepared for college. It’s easy to be brave when you don’t know you’re being brave. She just went on there and did what she had to do. I’m very proud of her. She was definitely a trailblazer.”

Myers teased that her brother would be the one to get in trouble and that her father would refer to her as her brother’s “defense attorney” because of how she would plead his case. It rarely if ever worked but thinking back to those times makes her laugh. “

Despite being treated fairly for her first two years as the only Black student at St. Vincent’s and then as a junior and senior alongside Douglas and Johnson, Myers does remember there was a time her intelligence and dreams were questioned. A teacher assigned the seniors to write about where they wanted to apply to college. Myers wrote about applying to her dream school, Middlebury College, a private Liberal Arts college in Vermont and one of the best of its kind in the country. Myers was dreaming big, the teacher didn’t agree. She requested that Myers’ father come to a parent/teacher conference. The meeting was to possibly discourage his daughter’s high post-high school expectations. All that meeting did was further fire Meyers up. She would graduate from St. Vincent and attended Middlebury, later graduating with a Bachelor’s in French and Sociology Anthropology. As a junior, Myers earned a coveted spot in Middlebury’s summer language program, a graduate-level program for adults. “Those were real adults,” she laughed while thinking back to being one of the only college students in the program that year.

Was it because she was Black or because the teacher didn’t believe she could achieve it? Myers isn’t sure, but she remembers what it felt like, remembers it like it was yesterday. “I do not feel that I was treated differently, in no situation was everyone, my friend, but I got along with everyone,” said Myers, who occasionally will attend class reunions. “The lay teachers were amazing; at no time did I feel singled out. I felt like I was just a kid.”

Myers came home to Savannah following college graduation and began a 40-plus year career in education, teaching within the Chatham County public school system. She became an administrator and a principal at Hodge Middle School before retiring. Some of the students Myers taught would raise funds for summer trips to Europe which gave her the opportunity to have them use the French they learned in her classes in the real world. She also spent years traveling to the old Soviet Union to teach English to teachers there. Sometimes she would stay in the homes of host families, most likely being the only Black person to ever have stepped foot in these people’s homes. Again she was breaking new ground and blazing new trails. “I enjoyed being immersed in their culture; it was fine,” she said of her four trips to the Soviet Union. Her time at St. Vincent’s Academy helped craft an exciting and impressive life and career.

“The experience at St. Vincent’s reinforced what my parents taught me and gave me real-world experience,” said Myers, who attends St. Benedict the Moor Church, Savannah.

“I am sure it was difficult for Donna and her family to make the decision for her to attend SVA in the 60’s,” said SVA President Mary Anne Hogan in an email to the Southern Cross. “Although I can never speak about a specific high school experience of any graduate, since the memories of high school are so personal, I pray she looks back fondly on her time here.”

She does. “Having done that alone for two years, I’m sure having that many years at a young age in that situation probably prepared me for anything, said Myers.”

And everything. Consider the trail blazed.