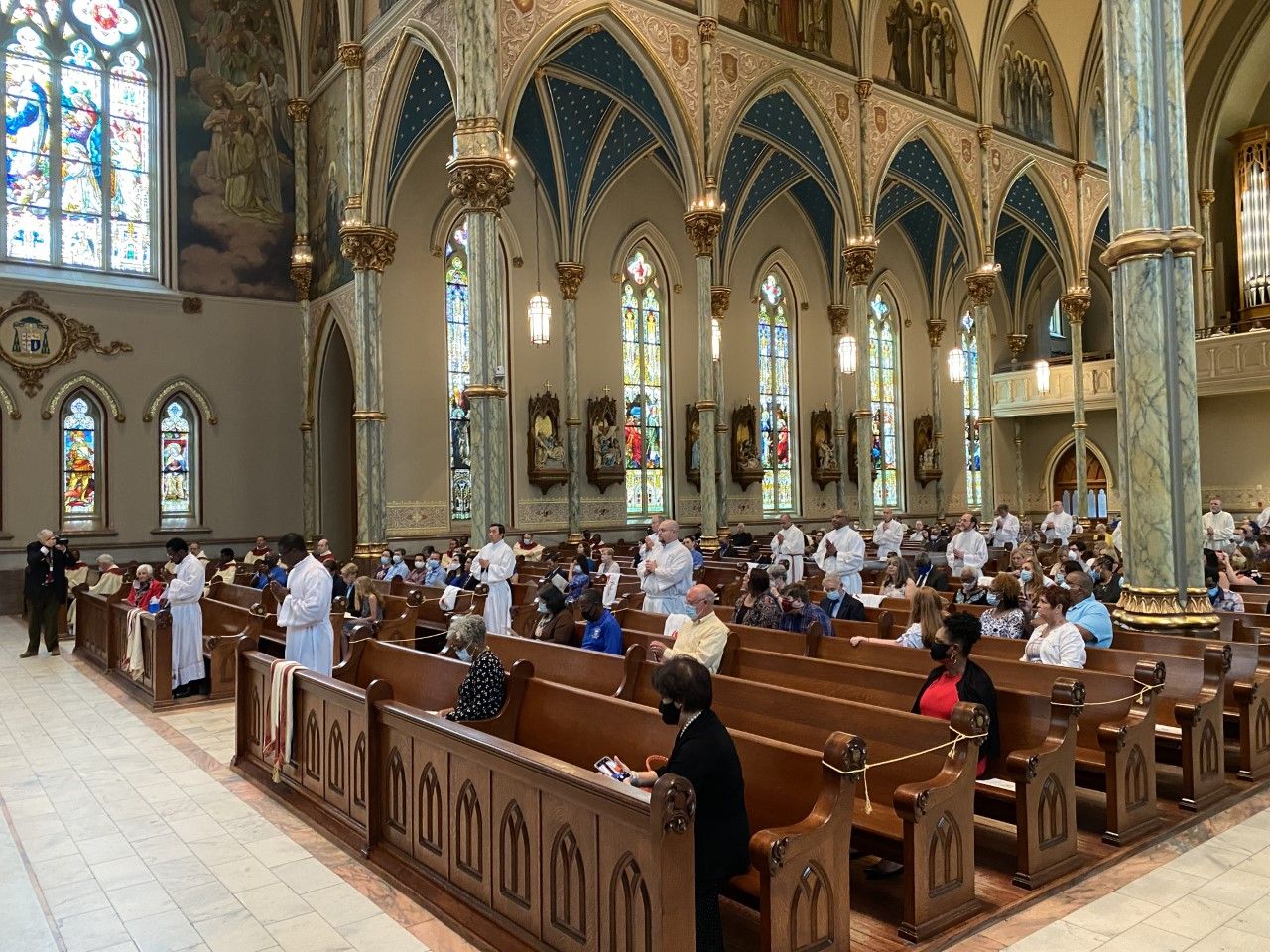 14 deacons, two transitional and 12 permanent, stood in unison during the Calling of the Candidates Saturday. Photograph by Donnell Suggs

SAVANNAH, Ga.- The high school coach tried to stop himself from crying but the tears made their way down his cheeks despite his efforts. Newly ordained permanent deacon Kevin Knight, upon leaving the Cathedral Basilica of St. John the Baptist, Savannah following the completion of Ordination to the Order of the Diaconate Saturday, May 30, had to do whatever he could “to not cry in front of my guys,” he said later on. Dozens of student-athletes held a sign that read “Congratulations Coach Knight” on the sidewalk below the church steps. The surprise he and his wife witnessed was one for the ages. “I had no clue,” said Knight, one of 14 men ordained that morning. “That was great to see that level of support from [them]. It’s been a long journey and I’m happy about how everything turned out.”

Of the 14, a pair were ordained as transitional deacons, Christopher Awiliba and Emmanuel Kyere Antwi, and a dozen more candidates for the permanent diaconate took the next step in what has been a long journey, Benjamin Ernst, Robert Fritts, Mark Girardeau, John Johnson, Knight, Keith Liner, Orlando Lopez-Camuy, Terrence Mermann, Mario Rabusin, DeWayne Tillman, Hoang Tran and Eric Windmoller.

With family, friends, priests and fellow deacons from across the diocese in attendance, the Diaconate class of 2020 went through the orders of the day beginning with a greeting from Archbishop Gregory J. Hartmayer, OFM Conv., who was in town for the ordination. Father Daniel Firmin greeted the former diocesan bishop back. “It is always good to see you and we welcome you back to Savannah,” said Firmin, who is currently the diocesan administrator.

“Good morning, it’s so good to see human beings back in church again,” joked Hartmayer, who added that Awiliba and Antwi were now speaking “southern” after their time living and studying in Savannah after having moved here from their native Ghana.

Hartmayer’s homily made mention of the challenges all 14 deacons face in their new roles as stewards to the communities they are preparing to serve. “We are faced with the same challenges, the prejudice, the profiling, and we have to make them feel welcome,” said Hartmayer. “It is often the deacons that have to make them aware.”

All 14 of you can frequently affect parish ministry by using the particular gifts God has given you, and He has given you each different gifts.”

Specifically to the transitional deacons, Awiliba and Antwi, Hartmayer said, “The promise that you make today of celibacy, chastity and obedience to your bishop are most related to Christ. We are called to serve, not be served.”

To the permanent deacons, all of whom had their wives by their side, Hartmayer said, “The challenges that face you today is to walk the talk,” referring to being an example to the parishioners they will encounter in their new roles.

Throughout the ordination an eight-person choir sang from high above as an organist played beautiful melodies that filled the halls of Cathedral Basilica of St. John the Baptist. The churches are full of parishioners for the first time in nearly three months. Social-distancing observances left every other pew empty, but that did nothing to temper the thunderous applause that came from those in attendance following the completion of the presentation of the Book of Gospels, which symbolizes the deacons commitment to proclaim God’s word.

Prior to the final blessing and dismissal the archbishop took a moment to thank the wives and families of the deacons for their “support of these men.”

One of those supporters in attendance, Patricia Grant-Singleton, who identified herself as Antwi’s “adopted mom” said of her feelings on Antw’s accomplishing this goal, “When he first came here [to Savannah] I just took him under my wing because he was so far away from home. I’m very proud of him.”

With opportunities to meet with well-wishers and to take pictures on the steps of the Cathedral Basilica under a glorious afternoon mix of blue skies and powder-white clouds, deacons took time to express their feelings on a job well done.

“It feels great,” said Awiliba of the ordination. “I have gratitude to God, it has been him all this while. Getting to this far is all by his grace. I know he’s going to continue to help me in ministry and his graces are surely going to be sufficient for me as I continue to minister as a deacon.”

“Excited,” said Tillman. “Blessed. The journey will begin with the Holy Spirit guiding us.”

“There’s a great feeling of warmth and arrival,” said Fritts, who had plans to preach at a celebratory gathering at his parish, Blessed Sacrament Church, Savannah later that night. “We’ve been on the journey and now we’re here. Now we’re really looking forward to this trip. The real excitement begins now.”

Raubsin echoed a similar assessment. “It’s more like going through a door,” he said. “The travels are not over, we’re just continuing the journey.”