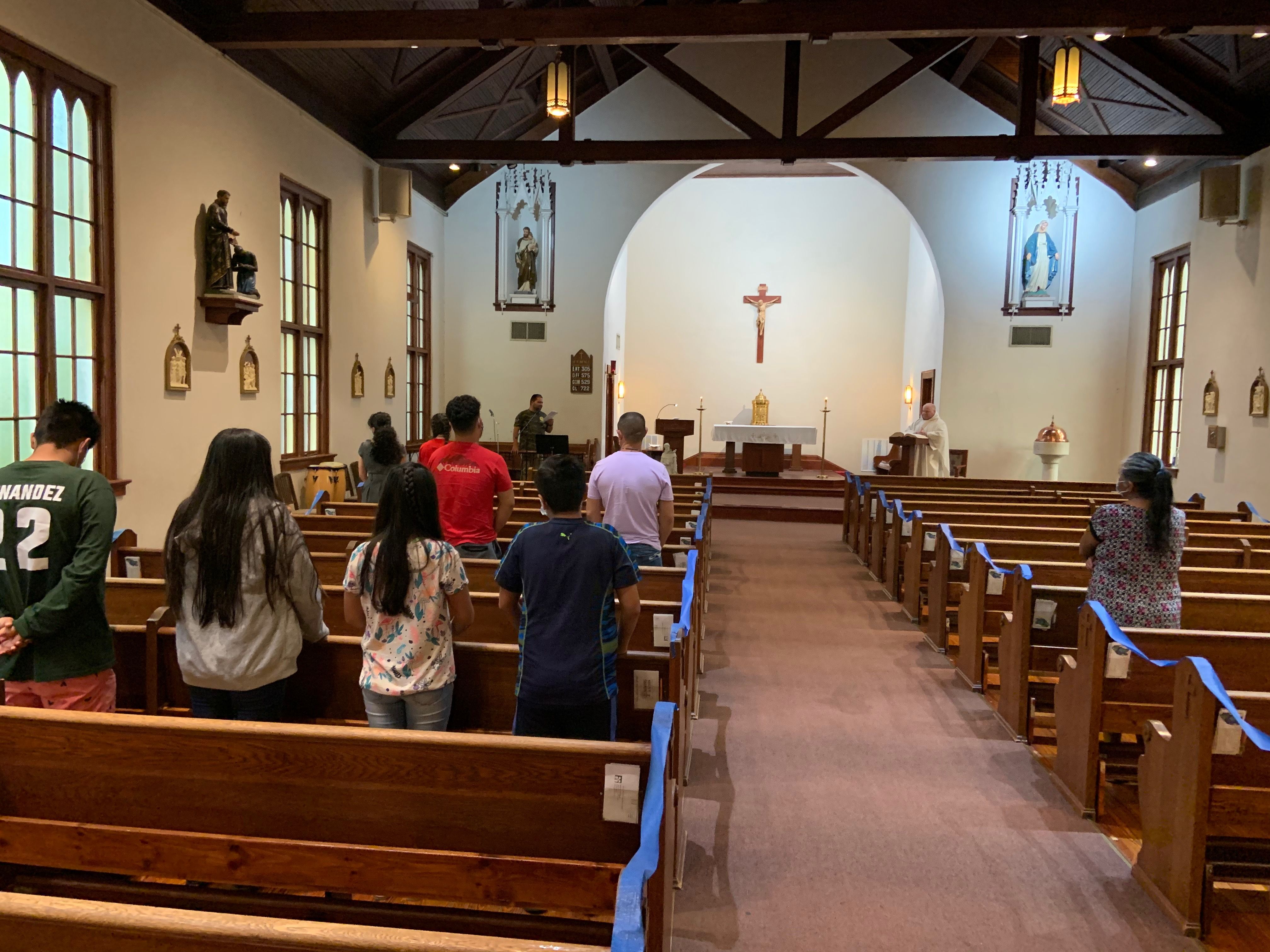 MACON, GA. - The blue masking tape stretched from one pew to another let visitors know where they could and could not sit before 7 a.m. Mass. With only nine people in attendance it would not be difficult finding a pew that was adequately socially-distanced. Meanwhile Father Casey Cole, Order of Friars Minor (OFM), gave a homily that asked for less distance, figuratively speaking, from one another and more togetherness. “There’s a call for us today to have empathy,” he said. “To get outside of our bubbles of comfort.” Father Casey referenced St. Peter Claver, the patron Saint of Slaves and Race Relations, as a great example of getting out of one's comfort zone and to the level of the people he or she wants to help. “St. Peter Claver was a man who didn’t just imagine the poor, but in fact went to the new world himself and experienced the indignities they went through. There was no doubt he felt what they felt.”

This year there has not been a religious holiday or celebration that has not been interrupted or altered in some way due to COVID-19. That said, there is still reason to celebrate the Saints that the many parishes within the Diocese of Savannah are inspired by and named after. The Feast of Saint Peter Claver took place Wednesday, September 9 and though different, the Fathers, Sisters and lay faithful at St. Peter Claver Church, Macon and St. Peter Claver Catholic School, Macon did their best to celebrate the patron Saint of Slaves and Race Relations the best they could under the circumstances. There weren’t any gatherings outside of morning Mass and a Spanish Mass (Father Bill is fluent) that was scheduled for later that evening but there were virtual celebrations in both the church and school via Facebook and Zoom. There was also a food outreach that took place that afternoon.

“Normally our feast day is a bigger deal and there would be more parishioners [here],” said Father William “Bill” J. McIntyre, OFM, the pastor at St. Peter Claver Church, Macon the past six years. “Hopefully next year we can celebrate in a bigger and better way, but this year there will be virtual reflections on the life of St. Peter Claver online on the parish’s website.”

Born in Lleida, Catalonia (located a little more than 50 miles from Barcelona) in 1580, St. Peter Claver upon arriving in the port city of Cartagena in 1610, studied theology prior to being ordained a priest. The slave trade out of Africa, particularly West Africa, into Cartagena greatly disturbed Claver enough for him to dedicate his mission to administering aid to the slaves as soon as they stepped off the ships they were forced to live on for months as they crossed the Atlantic Ocean. In many occasions Claver gave the slaves food, medicine, and basic instruction on where they were and what was taking place. Many priests felt the need to pray for the enslaved people, Claver on the other hand went to where the people were in order to minister to them.

St. Peter Claver is an inspiration to all who work and worship at the parish but according to the school’s principal, Sister Cheryl Ann Hillig, DC, he is also an example of humility and charity for the students at the parish school. “St. Peter Claver is someone who I think our student can relate to,” she says. “It is really important to celebrate the Feast of St. Peter Claver because the kids continue to need to see good role models. Our students understand the meaning of being a good neighbor and why it is important to reach out to their neighbors.”

Sister Kate McFall, Daughters of Charity (DC), a teacher at St. Peter Claver Catholic School echoed her principal’s sentiments on St. Peter Claver as a role model and example, “Not only is he the patron Saint of the school, St. Peter Claver’s drive to serve the people is a great example of what we want to teach,” she said. “He did not want to just be outside among the people, he wanted to be with the people.”

38-year teaching veteran and a parishioner of St. Peter Claver Church for the past 25 years, Mrs. Sandra Davis-Johnson, currently in her fifth year teaching at the school, said about celebrating the feast, “We had to take time to remember all of the great work St. Peter Claver did fight for social justice. He embodied the spirit of Jesus Christ.”

Father Robert Chaney, the pastor at Resurrection of Our Lord Church, Savannah did not celebrate the feast of St. Peter Claver was at his parish but he was aware something was missing, but the importance of recognizing what the great man stood for was always in season. “Normally we would have something on the Sunday before the feast but not this year,” said Father Chaney by phone. “As we continue to deal with various social issues and prejudices in general, we are called in faith to treat everyone with dignity. That was what St. Peter Claver did.”