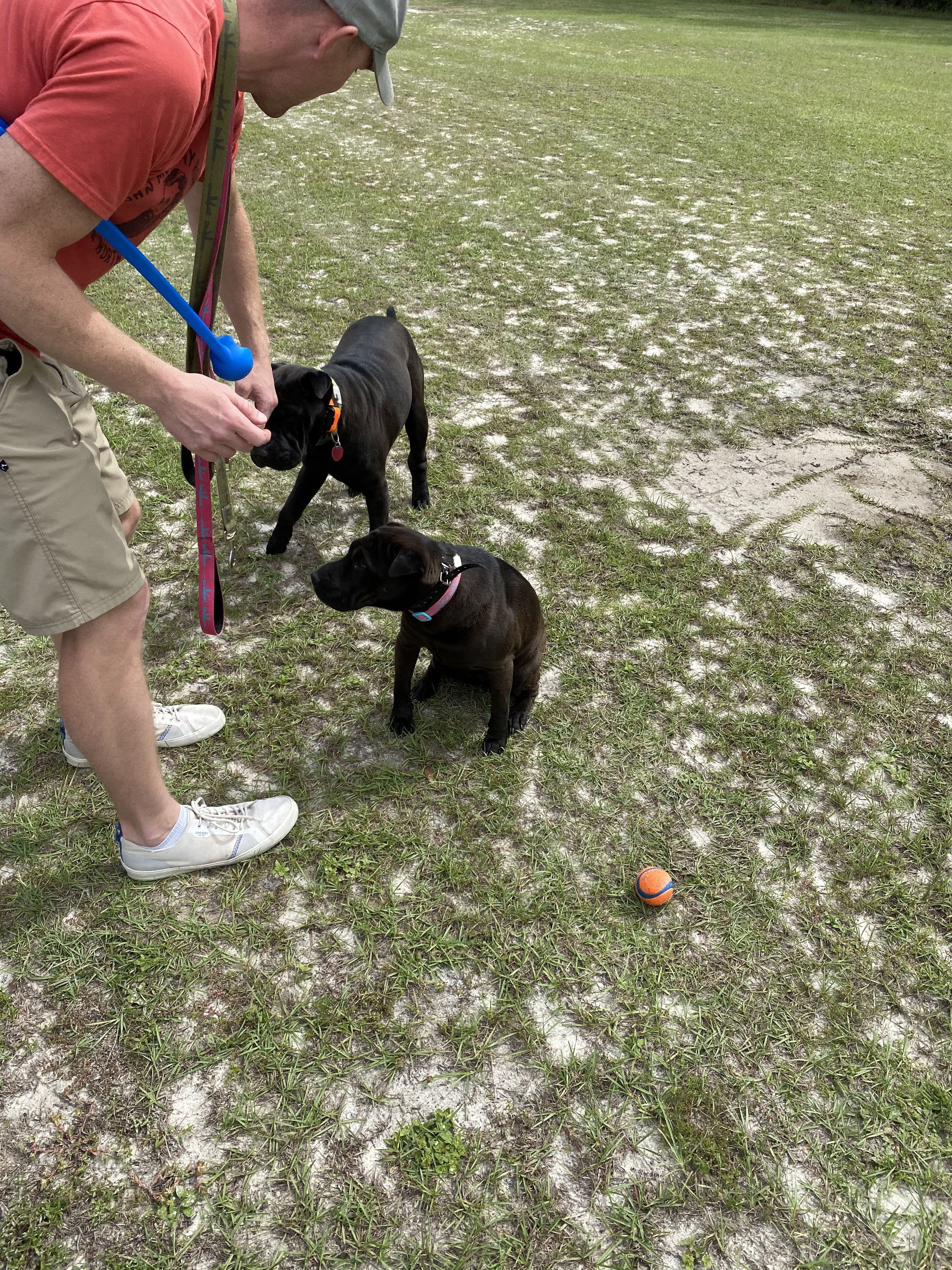 James Melnick and his dogs, Beast (left) and Beauty, prepare for the blessing of the animals at St. Stephen Church, Hinesville Saturday, Oct. 3. Photograph by Donnell Suggs

HINESVILLE, Ga. - The pair of charcoal Shar Peis were hesitant to leap from the rear of the silver SUV parked by the greenspace at St. Stephen Church, Hinesville Saturday afternoon. The dogs, Beauty and Beast, are sisters and are owned by James and Christine Melnick, and were there for the blessing of the animals but were not familiar with the territory, thus their hesitancy. “My wife has to get all of the credit, she has the girls trained very well,” said Melnick, an active duty U.S. Army soldier stationed at nearby Ft. Stewart. Beast, the older, and Beauty were adopted into the family while the Melnicks, who also have an infant daughter, were stationed in California. The dogs are members of the family. “We are so blessed to have them.”

Tito the Yorkiepoo was anything but hesitant to play upon arriving at the annual blessing. An energetic dog, Tito had to be calmed down by his owner Michele Hendricks from time to time. Hendricks, a parishioner at St. Stephen regularly brings Tito to the blessing. “This is the fourth time we have come to have him blessed,” she said. “One year someone brought a parrot but most of the time it’s just dogs and cats.”

Unfortunately there were no parrot sightings this year.

The Feast of St. Francis of Assisi, the patron saint of animals, was celebrated all over the world on the weekend of October 3 and 4. In Hinesville, at St. Stephen, the feast was celebrated by blessing area pets. An annual affair, Father Adam Kasela, the pastor at St. Stephen, looks forward to meeting the parishioner’s many pets. With the current coronavirus pandemic keeping people from gathering as much as they had during previous celebrations, Kasela was ready for this year. “Especially with the Holy Father going to visit Assisi this weekend it is very important to bless the animals,” he said moments after blessing a cat.

The crowd, at least a dozen families and their pets, was smaller than in the past but Kasela was positive about the participation. “It remains very popular and this is something we will always be celebrating,” said Kasela while blessing a cat. He admitted that “we used to have more people.”

The cat, Livi, belonged to Ricardo Velez’s daughter but since she was busy he decided to bring Livi to be blessed. “She has been real kind to us and has been a blessing to our family,” said Velez of the cat who hid in a travel bag for the majority of the blessing. The presence of 11 dogs might have been the reason.

Snowy, a nine-year old Chinese Pekinese, looked like he was having a bit more fun that Livi at the blessing. His owner, Jewel Barrett, a parishioner at St. Stephen carried him over to introduce him and explain why she brought him to be blessed. “He is part of the family, and as a Catholic we believe blessings are important.”

The theme of family seemed to be omnipresent throughout the blessing. A number of the pets were rescued. Others have been with their families for over a decade. Bo, a 12-year old Maltese, was slow to interact with the other dogs due to his age but remained engaged with his owners, the Berg family. “We do this every year, it’s a family affair,” said Guy Berg who along with his wife, daughter and grandchildren brought their dogs and their neighbors dogs to be blessed. “This parish is one bog family,” said Berg, a long time parishioner.

During a prayer prior to blessing the animals with Holy Water Father Kanela said, “Blessed are you O Lord who for the sake of our comfort give us domestic animals as companions.” The dogs and cats in attendance were certainly there to give comfort to their owners, their families. Blessed are the pets that are also members of their families.