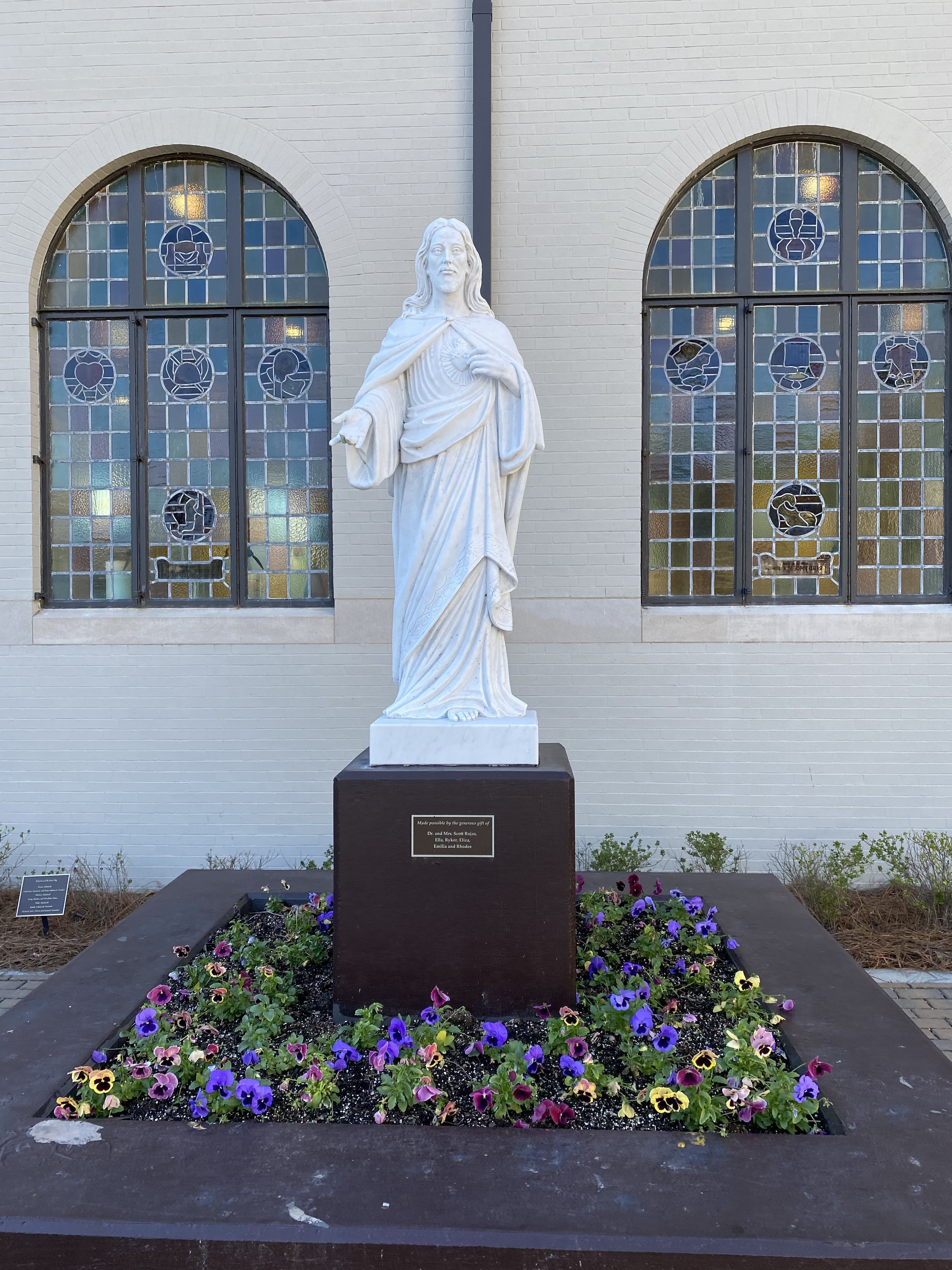 The Jesus statue outside of Blessed Sacrament Church, Savannah is new. The old one was mysteriously removed from the property during construction. Photograph by Donnell Suggs

Savannah, Ga.- Blessed Sacrament Church, Savannah celebrated their 100th anniversary December 6 with a Mass and a visit from Bishop Stephen Parkes, who was on hand to help reveal the final panels of a glass timeline located in the main hall on the school side of the campus. Erected in 1920, Blessed Sacrament Church has gone through several architectural phases during the past century. The most recent alterations to the church are now completed after five years of construction. The renovations to both the church and Blessed Sacrament School make it one of the most technologically advanced and multi-purpose facilities in the diocese.

Following morning Mass celebrating Feast of the Immaculate Conception on December 8, Deacon Bob Fritz took the Southern Cross on a campus tour to better explain the new additions to the 100-year old property. Right outside of the church entrance is a new marble statue of Jesus Christ in what is being called the Jesus garden, a small flower garden with benches for visitors to rest before and after Mass. The statue was ordered and shipped to Savannah from Italy following the disappearance of the statue of Jesus Christ that was situated on the corner of Waters Street and East Victory Drive. During construction, the statue was moved from its edifice and later mysteriously moved off the property. The new Adoration Chapel, also situated feet from the church's front doors, is big enough for six parishioners to sit in meditative contemplation of the Blessed Sacrament while remaining socially-distant.

Inside the school, there have been significant upgrades and renovations made within the past five years. Beginning with the gymnasium on the ground floor where the basketball court and adjacent offices and bleachers are all new. The school also has a renovated science lab, art room, and broadcast room inside the new library. The old gymnasium roof was preserved and put on top of the second floor library. The building also has an elevator for staff use. The Gretsch Lecture Hall, also on the second floor, looks more like a collegiate classroom than what you might find in an elementary school. Fred Gretsch Enterprises made considerable financial contributions to the construction of the state of the art lecture hall.

The church raised just over $6 million of the $10.2 million costs of the complete renovation.