Bishop Stephen D. Parkes Invites Faithful to join in Act of Consecration of Russia and Ukraine on March 25th

Lenten Activities around the Diocese 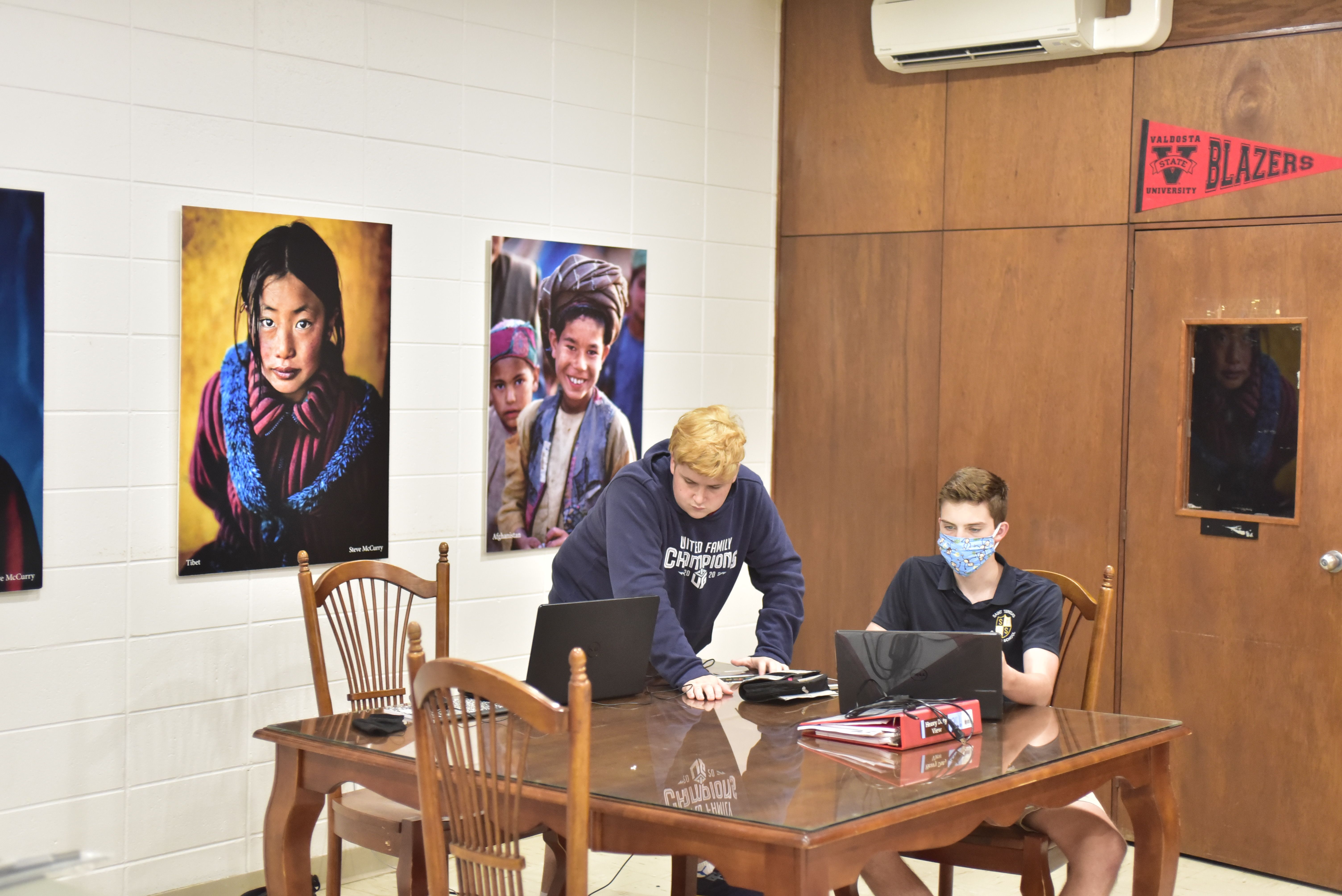 A pair of St. Teresa's seniors go over school work under the watchful eyes of their peers from all over the world. Photograph by Donnell Suggs

ALBANY, Ga. - St. Teresa Catholic School vice principal and second grade teacher Linda Johnson saw it first. It was seconds before the others looking at the photo also saw what she recognized as the beauty of the photo, the beauty of that moment captured by photographer Steve McCurry. A pair of young boys, one Black, the other white, sat lazily in a hammock, wide smiles on their faces. Below their images were their shadows, similar in every way the boys were not, Johnson used that to express her feelings on the 100-plus images posted around the school. “This was no accident, it truly is a gift from God that this exhibit is here,” said Johnson, a mother of four who has taught at St. Teresa’s for decades. “We teach our children that we are all members of the family of God and this is what the family of God looks like.”

Johnson’s point: The boys may look different but just like their shadows they are more the same than different.

The Besharat Arts Foundation, based in Atlanta, brought the “Art in School: The Faces of Innocence” installment to St. Teresa Catholic School, Albany as the first of three series of photos by award-winning photographer Steve McCurry that will be making their rounds to the school. McCurry, the founder of ImagineAsia, a non-profit organization working to provide resources to children and young adults in Afghanistan, was pleased that the series of photos unearth such emotional responses. “I’m glad to be sharing my art and my experiences with those kids,” said McCurry by phone from New York Tuesday evening. “I think it is important for them to see other cultures and other kids who look like them.”

The Besharat Arts Foundation agrees with that premise. “At Besharat, our goal is to nurture empathy, that ability to understand and share the feelings of others. Our similarities can bring us closer to each other, or our superficial differences can drive us apart.”

Similar exhibits have been installed in 47 schools, 13 in France and 345 in the United States. “We all need to learn respect and understanding of different cultures, religions and ethnicities,” says McCurry, who spent summers at his Aunt and Uncles home in Atlanta as a kid and has a “fondness for Georgia.”

The photos at St. Teresa are of young people from as far away as Saskya, Tibet, Oaxaca, Mexico, Rome, Italy, Mandalay, Burma and as close to home as Lancaster, Pennsylvania. In the photos the children are smiling and serious, playing and working, on land and in water, alone and with friends. They are kids just like the students at St. Teresa’s and that is what Johnson likes most about the exhibit. “Our motto is ‘One family, one mission, one hope’ and we are so grateful for this opportunity,” said Johnson. Of one picture of a boy from Nuristan, Afghanistan, a worn wool newsboy cap covering his head, one student said to her, “He looks like he could be my friend.”

St. Teresa’s Public Relations Coordinator Katie Jenkins, herself a St. Teresa’s alumna, has three children attending the school and thinks the exhibit is a welcome addition to the decor. The photos have been placed in both the middle school and high school buildings, in the cafeteria, hallways and right outside of the school’s main office. They have become a part of the school. “I think it is awesome for our children to have this opportunity,” said Jenkins. “The photos bring a lot of diversity to the school and we really appreciate the message the Besharat Arts Foundation is sending. It is important for the students to see how other kids live.”

The exhibit will have a series of wildlife photos in the next installment and following that will have a series of photos focusing on art history to close the exhibit. Three private schools in Georgia have been selected to host similar exhibits. St. Teresa’s alumnus and Besharat Arts Foundation Board of Directors member Joe Scherberger brokered the union between the school and the foundation.

A photo of a student at his desk in a schoolhouse in Omo Valley, Ethiopia, a focused look on his face, brings viewers, teachers, administrators and students back to reality. Their kids in Albany are just like other kids from all over the world. They are students hard at work.  “It brings it back to the basics,” said Jenkins.

“We believe by exposing children to great art from around the world, they will acquire a gut-level understanding and empathy for the spectacular beauty of our planet and its people,” said Besharat.

Just kids and shadows. All one and the same.