Aquinas High School swimmers are making the most of this season 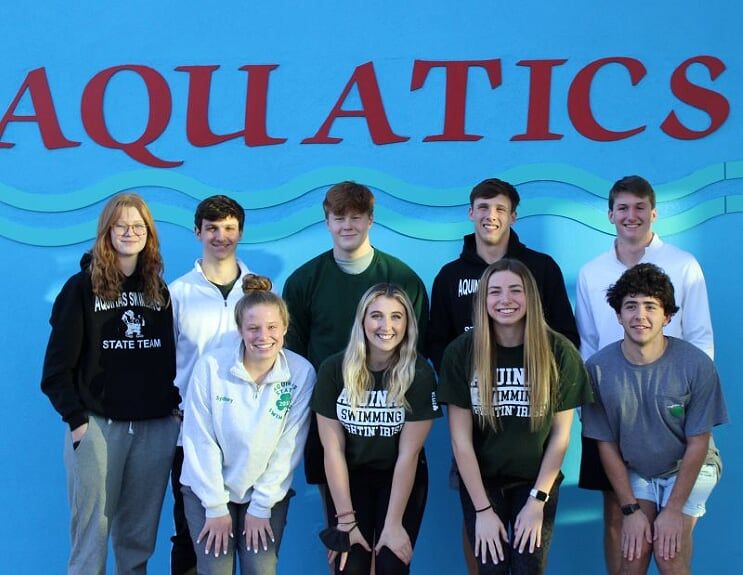 The Aquinas High School swim team (pictured at a recent meet) have qualified for the GHSA state championships in Atlanta this week. Photograph by Audrey Patty.

The Aquinas High School swim team, all nine members, are currently in the process of preparing for the final meet of the 2021 season, the Georgia High School Association (GHSA) swimming and diving state championships. First, however, they have one more afternoon practice session before they leave for Georgia Tech’s Recreation Aquatic Center in Atlanta. “It’s going to be sad,” said Aquinas community coach Dana Pittman of the Tuesday afternoon practice. “This season was really weird because of COVID.” Pittmans has been helping coach the Aquinas swim program for the past 12 years alongside Belinda Waters, the other community coach and Santos Pagan, the head coach.

This season has been like no other she has been associated with. Not even close. The Augusta Aquatics Center pool, where the team has their practices, was closed due to the coronavirus in March 2020 and was not opened to the public again until late last year. The swim team held their first practice of the season on January 6, 2021, nearly a year later. “We had our first practice a month ago and the kids have been able to practice 10 times,” admitted Pittman, who’s daughter Sydney, a senior and a nationally-ranked skeet shooter, also swims on the squad. Despite the lack of practice time and opportunity to work together the team had all nine swimmers qualify for the state championships. The Fighting Irish had four meets this season, two in Waycross and another pair closer to home in Richmond County. According to Pittman the ups and downs of this season has brought the team together in a way. “I think they grew up and became stronger, physically and mentally,” she said. “They kind of knew this was their last season. They all do their part to make this team work.”

One of the nine swimmers that made the state championships is senior Anna Summers, who recently signed with Virginia Tech. Another is Charlotte Schow, a junior, who has improved year after year and is showing immense progress. “[Charlotte] is coming around and she’s a good study,” said Pittman. Junior Collin Skedsvold, who Pittman called “a good swimmer and the most passionate male swimmer on the team” is also making the most of this season. “You can just see his passion for the sport,” she said. “He should do pretty good next season. It’s in his mind that he’s a winner.”

Asked how she thinks the faith of the individual members of the team has helped get through this truncated season Pittman said, “Their positive attitude helps a lot. There’s no negativity with this team and I think being students at Aquinas has helped a lot.”

“I believe their faith helps the kids realize they all have to work together to succeed.”

The state championships, which will take place from Tuesday through Saturday, will not have spectators allowed within the venue. Teams are only allowed a certain number of coaches on hand and just one by the pool during the meet. No parents will be allowed to attend and that as much as anything else will be a huge adjustment for the Aquinas swimmers. “Asked to describe this season in a few words Pittman said, “Challenging, fun, determined, but our final goal was to make state and we accomplished that.”

Benedictine Military School and St. Vincent's Academy have both also qualified swimmers for the state championships this week.