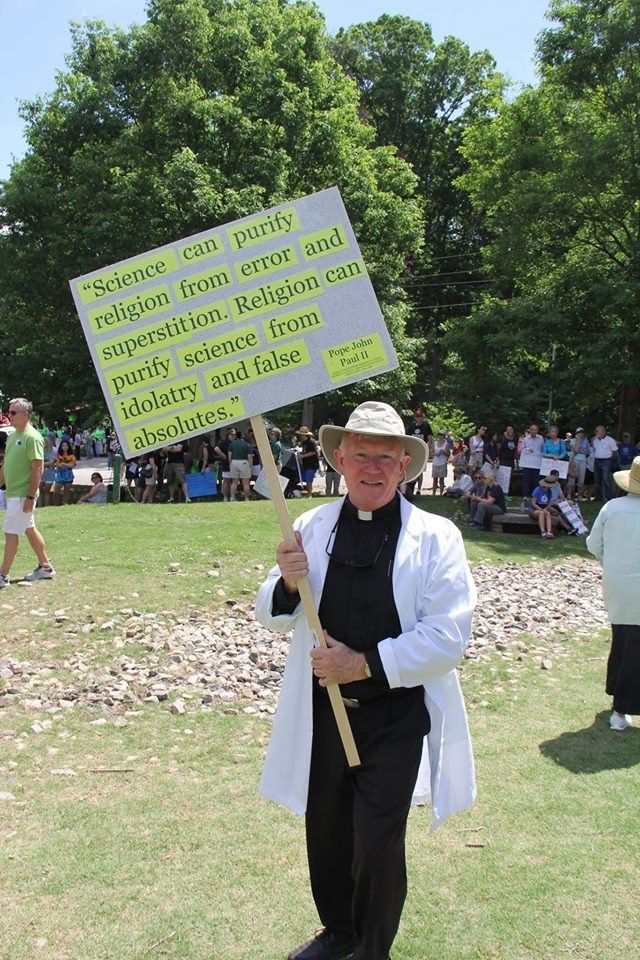 In April 2017, I took part in the Atlanta March for Science.  Wearing my clerical black pants and shirt, I donned a white lab coat and carried a sign with this quote from Saint Pope John Paul II:  “Science can purify religion from error and superstition. Religion can purify science from idolatry and false absolutes” (Letter to Rev. George V. Coyne, SJ, Director of the Vatican Observatory, 1 June 1988).

As you might imagine, the black religious attire combined with the white laboratory garb – I vaguely resembled a habited Dominican – caught quite a few eyes and led to some good conversations with other participants about the interface between Science and Faith.

Our Church is often caricatured as being anti-science, which is patently false.  For example, people hear that we oppose embryonic stem cell research, which usually involves the destruction of a human embryo, and uncritically conclude that our faith opposes research that can lead to cures for suffering and disease.  This from the USCCB website: “The Catholic Church has long supported research using stem cells from adult (italics mine) tissue and umbilical cord blood, which poses no moral problem.”  Bishops conferences in South Korea, Australia, and the United States, among others, have help provide funding for adult stem cell research, an area of study that offers great hope for people suffering from a variety of diseases and traumas.

Not only our Church, but also many scientists themselves recognize that moral or ethical issues that arise from their research have to be taken into consideration.  N. Ohara, who works in the Department of Obstetrics and Gynecology, Kohnan Hospital, in Kobe, Japan, writes in the journal Clinical and Experimental Obstetrics and Gynecology, “…science and technology can never be independent of the criterion of morality, since technology exists for man and must respect his finality.”

In the very early days of research into recombinant DNA, many of those engaged in the laboratory work recognized that there were implications far beyond the test tubes and chromosomes in their experiments.  In 1975, the first Asilomar Conference was held at the conference center of Asilomar State Beach in California, bringing together 140 molecular genetics researchers, physicians, and lawyers.  Paul Berg, known for being one of two recipients of the Nobel Prize in Chemistry in 1980, was one of the conveners.  The conference concluded with a recognition of the potential dangers, including ethical matters, that had to be considered and addressed and the safeguards that should be enacted as the work on recombinant DNA proceeded.

Historically, the Church has been a great supporter of both the arts and the sciences.  Notable scientists were also Catholic clergy:  Fr. Gregor Mendel known as the Father of Genetics, geologist and volcanologist Fr. Giuseppe Mercalli, who developed a scale for measuring earthquakes that is still used by the U.S. Geological Survey, and Fr. Georges Lemaitre, known as the Father of the Big Bang theory.

Lay Catholic scientists, too, are remembered for their work:  Henri Becquerel, Nobel Prize winner and one of the discoverers of radioactivity, Sr. Mary Kenneth Keller, the first women to earn a PhD in computer science and a developer of BASIC, and Gerty Cori, the first American woman to win a Nobel Prize in science (physiology).

Faith asks, “What is the origin of sin and suffering?”  We learn from revelation that our sin and suffering comes not from God who created man and woman in Paradise, but from the choices we made and make that contradict God’s will.  Science asks, “What is the origin of the species that populate the world?”  We learn from scientific inquiry and experimentation that, “all species of organisms arise and develop through the natural selection of small, inherited variations that increase the individual's ability to compete, survive, and reproduce” (Darwinian evolution -Wikipedia).  There are questions that are not proper to faith.  Nothing in Divine Revelation tells us how to treat chronic leukemia.  There are questions that are not proper to science.  Laboratory experimentation is not going to reveal to us the power of forgiveness.

Unfortunately, there are those in the science community who deny the existence of God and, therefore, Divine Revelation.  For them, any answer to any question about the fundamental nature of reality, the origin of life, or the true purpose of human life, can and must be answered without any reference whatsoever to a God.  As, unfortunately, there are people of faith who ignore science and try to cast anyone who adheres to good, solid science as being unfaithful or, worse, as acting in a way that can lead them to eternal damnation.

As for me and my house . . . I will always treasure both my Catholic faith and my science education.  Interestingly enough, the education I received as a Catholic and as a biologist came from the same five Catholic schools.  Faith offers me an explanation of the “Whys” while science explains to me the “Hows.”  That education has been, as far as I am concerned, one of the greatest gifts in my life.