Safe Lodging in His Father's House

Written by Fr. Douglas Clark on 24 September 2020. Posted in Columns. 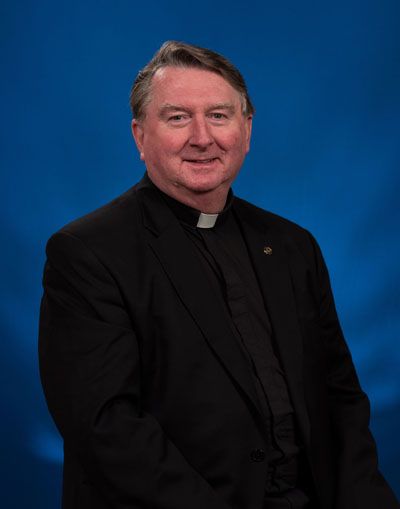 One afternoon in the hot summer of 1976, just after my ordination to the priesthood for the Diocese of Savannah, the front doorbell rang at the old Blessed Sacrament rectory on Victory Drive, Savannah. The front door was sort of a ceremonial entrance, right on that busy street, so most visitors parked in the lot and rang the back doorbell.

I answered the doorbell to find a tall, friendly Irishman, from County Cork, who introduced himself to me as Jerry McCarthy, a seminarian for our diocese since 1971. He explained that he had taken a job as a doorman in New York City to earn a little money and to begin to know the United States. He quickly called Savannah home. From that July day, 44 years ago, until August 26, 2020, Jerry McCarthy and I were friends, associates, collaborators and, after his own ordination two years later, brother priests, serving together in that portion of the Lord’s vineyard known as the Diocese of Savannah.

Father McCarthy’s first assignment as a priest was as assistant pastor (now called “parochial vicar”) of Saint Teresa Parish, Albany, where he joined Father Herbert J. Wellmeier, pastor, and yours truly, associate pastor (now also called “parochial vicar”), in ministering to a vibrant parish with a thriving school, in what was then Georgia’s “Good Life City.” As the two young associates, we discovered that we had much more in common than our youth. We were both musical (he was very adept at the accordion and I “played a mean bass”), well educated (he had studied economics and I history before seminary), and convivial.

In Albany, as later in the Savannah area, we socialized with many of the same Catholic families and individuals. Most of all, we enjoyed each other’s company and could engage in serious discussions, cry on one another’s shoulders, and laugh at each other’s jokes. He even used his experience with tractors on his family’s Irish farm to diagnose, correctly, what was wrong with my lemon of an American car—the hoses were connected backwards.

In 1980, I was sent back to Rome for further theological studies. In 1981, Jerry was sent to study canon law in Washington. He spent a summer with me at Sacred Heart Parish, Savannah, in 1982–82, again sharing many friends, and often got together when he was in Savannah at the Tribunal and then at Our Lady of Lourdes, Port Wentworth, and I was at Saint Anne, Richmond Hill. When Hurricane Hugo threatened to hit Savannah on September 21, 1989, my 40th birthday, Bishop Raymond W. Lessard called Jerry and me, who were serving in low-lying areas under evacuation orders, and invited us to take refuge with him at the Cathedral rectory. When it became apparent that the storm would not hit Savannah, Father Bill Simmons, the rector, fired up the grill in the courtyard and served a lovely steak dinner for us all.

From 1993 until 1996, I served in Columbus as Campus Minister of Pacelli High School, and parochial vicar at Saint Anne’s with Fathers J. Kevin Boland and J. Gerard Schreck. In 1995, Father Boland was appointed Bishop of Savannah. A year later he transferred Father McCarthy to Blessed Sacrament Parish, Savannah, as Pastor, and me to the Southern Cross, as editor, with residence at the Cathedral of Saint John the Baptist. Jerry immediately “rang me up” and invited me join him for dinner at what became my favorite restaurant in Savannah. Over the years, we shared many confidences, and continued our convivial gathers, often at the kind invitation of Monsignor John A. Kenneally.

In 2010, Bishop Boland assigned me to Our Lady of Lourdes, Port Wentworth, where I was the beneficiary of the renovations that Jerry carried out in the rectory, where he put his considerable carpentry and engineering skills to use. I especially enjoyed what I called the lounge chair in the living room.

In 2013, Bishop Gregory John Hartmayer appointed Father McCarthy Pastor of St. Anne Church, Columbus and me Pastor of Saint Matthew Church Statesboro. Just a year later, during a small meeting of priests in Macon, he stunned all of us with the announcement that he had received a “death sentence” from his doctors. Like his late mother, he had been diagnosed with Ideopathic Pulmonary Fibrosis, which meant that his lungs were calcifying, cementing up from the bottom. There is no cure for IPF. At that time, he thought he might live another two or three years. Cautiously optimistic, Father McCarthy applied for a lung transplant through Duke University and was accepted as a candidate despite his age, but the required CT scan discovered lung cancer as well. At this juncture, he retired from the active ministry in 2018, having served our diocese for 40 years.

He then endured the prescribed chemotherapy, losing all his hair. I thanked him for emulating my baldness. At a meeting a month ago, I praised his mane of regrown hair, but couldn’t promise to emulate it. It was the last time I saw Jerry McCarthy alive.

On Thursday, August 27, Father Jerry McCarthy died peacefully in the retirement house which he had renovated by hand over the years. When I heard the unwelcome, but not-unexpected news of his passing, I recalled the wonderful prayer of Saint John Henry Newman:

May he support us all the day long,
Till the shadows lengthen
And the evening comes
And the busy world is hushed
And the fever of life is over
And our work is done—
Then in his mercy—
May he give us a safe lodging
And a holy rest
And peace at the last.

For my friend of 44 years, Father Jeremiah J. McCarthy, the evening has come, the fever of this life is over and his work is done. With confidence, I pray that in his mercy, God will give Father Jerry safe lodging in the Father’s house, a holy rest and peace at the last.